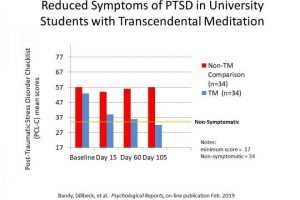 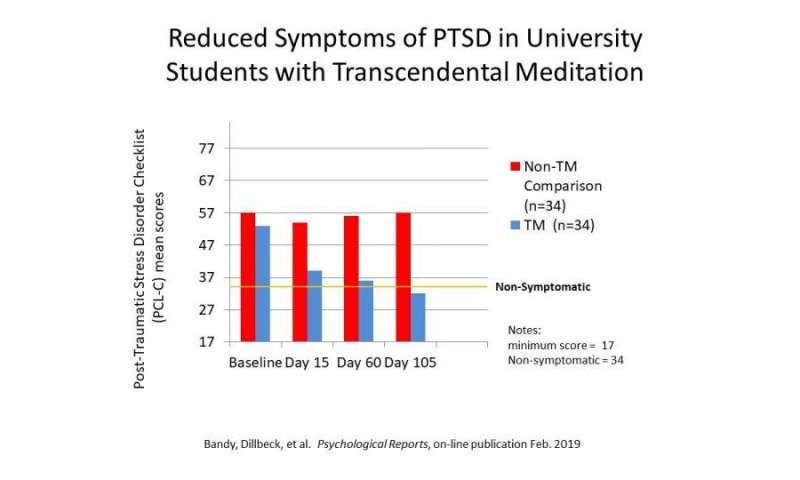 A very high percentage of young people in South Africa suffer from post-traumatic stress disorder (PTSD) and depression. A college that offers the Transcendental Meditation (TM) technique to its students found this approach helped reduce their symptoms.

A study published today in Psychological Reports showed that after 3.5 months of practicing Transcendental Meditation (TM), most of the 34 tertiary-level students at Maharishi Institute (MI)—all of whom were initially diagnosed with PTSD by mental health professionals—went below clinical thresholds as measured by standard assessments. The students also experienced relief from depression.

A comparison group of 34 students from the University of Johannesburg (UJ) suffering from PTSD and depression received no treatment and continued to show no change in their symptoms throughout the study.

An international research team of seven scientists and psychologists conducted the study. At the start, students at MI and UJ had a score of 44 or more on their PCL-C test and a clinician’s verification of PTSD. A score above 44 indicates likely PTSD and below 34 indicates that one is below the PTSD threshold.

Symptoms included nightmares, flashbacks to traumatic events, anxiety, fear, and hyper-vigilance. They also reported emotional numbness, anger, and violent behavior, as well as abuse of drugs and alcohol. PTSD is a chronic, debilitating condition that may last a lifetime if not treated effectively.

The study showed a rapid and significant reduction of symptoms in the test group, according to lead author Dr. Carole Bandy, professor of psychology at Norwich University, America’s oldest military college. Results were stable over time.

“A high percentage of young people in South Africa, especially those living in the townships, suffer from PTSD,” said co-author Michael Dillbeck, researcher in the Institute for Science, Technology, and Public Policy at Maharishi University of Management, Fairfield, Iowa. “To become successful students and productive members of society, they absolutely need help dealing with the symptoms of post-traumatic stress disorder. Our study shows, that after 3 months of meditation, this group, on average, was out of PTSD. It offers a way for others to effectively deal with this problem.”

High levels of PTSD are prevalent in South Africa

Up to 25% of the population in South Africa suffers from PTSD, according to Dr. Eugene Allers, past-president of the South African Society of Psychiatrists. Estimates put the same figure in the USA at 8%.

The South African Depression and Anxiety Group (SADAG), the largest mental health NGO in SA, which assists more than 180,000 people each year, interviewed and tested UJ students suffering from PTSD. They were also tested for depression, since it often accompanies PTSD and can in fact be considered a component of PTSD.

Students were only invited to join the study if they met two criteria for having PTSD: a score indicating PTSD on the PCL-C paper test and the opinion of a trained psychologist. Re-testing was 15, 60 and 105 days after baseline testing.

At 15 days into the study, Maharishi Institute students showed a significant drop of more than 10 points in their PTSD symptoms after learning Transcendental Meditation. They also found relief from depression, judged by Beck Depression Index scores.

Re-testing was also carried out at 60 days and 105 days of their TM practice. By 105 days, the average group score for the MI students was below the PTSD threshold of 34, according to the paper tests. The UJ students showed no significant reduction in symptoms—neither depression nor PTSD. They received no support of any kind.

A binary logistical regression analysis for the effect of TM practice on PTSD PCL-C diagnosis 105 days after instruction was also highly significant, with 7 likely PTSD and 27 unlikely for the experimental group and 30 likely and 4 unlikely for the comparison group.

First study of its kind

This is the first study of its kind to show how Transcendental Meditation can reduce PTSD in college students. “This study shows that there are new tools available for professionals to add to their tool bag,” says Zane Wilson, Founder and Chairman of SADAG.