Research decodes one way cancer survives treatment, proposes a way to prevent it 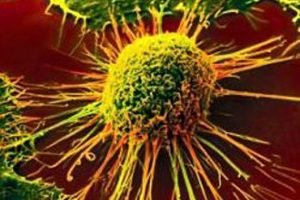 Cancer cells have various tricks up their metaphorical sleeves to survive in the face of chemotherapy, radiotherapy and other cancer treatments. Now researchers at Mayo have decoded one of those tricks using cell lines and patient-derived cancer cells, and proposed a way to resensitize breast cancer cells to treatment.

Cells have proteins on their outer surface that provide information to the body. Some cancer cells have a protein called “PD-L1” on their surface, and it links up with a protein called “PD-1” on the surface of an immune cell called a “T cell.” On the T cell, PD-1 acts as a brake on the immune response. When PD-L1 and PD-1 link, T cells gets the message that the cell they’re linked to is normal, and no immune response is necessary. Tumor cells, however, use increased PD-L1 on their surface to evade immune surveillance. Today, drugs that target these checkpoints are among the most promising forms of cancer immunotherapy.

But in a new publication in Molecular Cell, a team of researchers at Mayo Clinic are sharing another way that PD-L1 helps cancer cells.

“PD-L1 has a function inside the tumor cell that helps to make the cell resistant to chemotherapy and radiation therapy,” says Zhenkun Lou, Ph.D., co-leader of the Experimental Therapeutics Program at Mayo Clinic Cancer Center and one of the senior authors. “Our data suggest that cancer cells with high levels of PD-L1 may be more resistant to standard radiation and chemotherapy.”

The team also reported that an antibody used in their research blocked the internal function of PD-L1, making the cells more sensitive to treatment.

Haidong Dong, M.D., Ph.D., a Mayo Clinic cancer immunologist and co-discoverer of PD-L1, has been studying the cell-surface protein for quite a while. Since the Food and Drug Administration approved a cancer drug to block PD-L1 or PD-1, the lab has searched for a marker, or antibody, that would bind to those proteins and indicate which patient would benefit from this form of immunotherapy.

“My lab has produced several lines of PD-L1 antibodies, and at the same time, we also screened whether chemotherapy treatment would increase PD-L1 expression or not,” says Dr. Dong. “Unexpectedly, we noticed that tumor cells without PD-L1 demonstrated increased sensitivity to certain chemotherapy that causes DNA damage. But the underlying mechanism was not clear.”

Dr. Dong discovered that two of his colleagues also were working on a project in this realm. “I found Dr. Lou and Dr. Robert Mutter,” says Dr. Dong. “And they had already started defining the potential molecular mechanism responsible for cancer resistance to therapies that cause DNA damage in cancer cells.”

Along with Xinyi Tu, Ph.D., who is mentored by Drs. Mutter and Lou, the team began collaborating to figure out why tumor cells that had more PD-L1 were particularly resistant to DNA damage.

PD-L1 on the inside

What they discovered is that inside the cell, PD-L1 is used to promote repair during chemotherapy or radiation therapy. Their article is the first to report on this internal use, defining a new function for PD-L1 as an RNA-binding protein. PD-L1 may protect certain RNAs that code for crucial proteins required for tumor cells to recover from the effects of cancer therapy. They also report that H1A, one of the antibodies created to attach to PD-L1, which was developed with funding from Mayo Clinic’s Center for Biomedical Discovery, disrupts part of the PD-L1 protein that helps it maintain its functions in cancer cells.

“For human breast cancer cells that express PD-L1, we can use the H1A antibody to cause degradation of PD-L1 and make those cells more sensitive to treatment,” says Dr. Lou.

“Initially our routine tests failed,” says Dr. Dong. “But Dr. Tu, with her precise experimental skills and open mind, persisted and identified a key opportunity. That was crucial.”

For patients, this research uncovers a new trick cancer uses to avoid death during treatment. The researchers hope that with further work, they will improve treatment outcomes for patients with cancers that resist treatment.