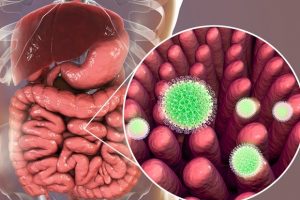 Acute gastroenteritis caused by infection with rotavirus represents a serious global issue associated with significant morbidity and mortality among infants and young children. It has recently been estimated that more than half a million rotavirus-related deaths occur each year among children younger than 5 years of age.

Despite the availability of oral rehydration solution and improved sanitation measures, rotavirus continues to be a threat. Clinical and population-based studies have shown that the new rotavirus vaccines are safe and effective in preventing severe rotavirus-associated diarrhea and mortality, but also reduce the impact upon public health resources.

Sanitation in general had a tremendous effect on diarrheal disease due to bacteria and parasites, but less of an impact on rotaviral disease. This is evinced by the persistence of rotavirus in high income countries and the likely transmission of the pathogen via person-to-person contact, which persists even as fecal-oral transmission subsides. Furthermore, improvement in sanitation did not reduce the prevalence of hospital admission.

Meta-analyses have shown that improved hand hygiene reduced the total burden of gastrointestinal illness by 31%. The usage of regular soap has shown to be most beneficial, while antibacterial soap provided little additional benefit. Immediate disposal of soiled diaper in sealed containers is also of utter most importance.

In 2008, the World Health Organization (WHO) linked existing regional surveillance networks to establish a standardized global sentinel hospital surveillance network for rotavirus disease. This network encompasses sentinel surveillance hospitals and laboratories that report clinical features, as well as rotavirus testing data and hospitalizations of children younger than 5 years of age to ministries of health and WHO.

In 1998, a rhesus-based tetravalent rotavirus vaccine (known as RRV-TV or Rotashield) was recommended for routine vaccination of US infants. However, the vaccine was withdrawn from the market within one year of its introduction because of its association with intussusception (a condition in which one segment of intestine “telescopes” inside of another, causing an intestinal obstruction).

In April 2009 the World Health Organization Strategic Advisory Group of Experts (SAGE) recommended that all national immunization programs should include rotavirus vaccination for infants. The incidence of rotavirus disease has dropped markedly in all the countries that introduced the vaccine.

Due to possible safety issues associated with the use of Rotarix and RotaTeq, several third-generation rotavirus vaccines are currently in the development. Parenteral immunization with inactive virus has been effective in animal models, but to date no proof of principle for this approach exists for human beings.

In conclusion, rotaviral gastroenteritis is considered to be a vaccine-preventable illness, based on successful outcomes in children and drop in hospitalizations in developed countries. Despite this impressive progress, much remains to be learned about rotavirus infection, as we still do not understand the mechanism by which current vaccines induce immunity to a myriad of serotypes found in nature.

Dr. Tomislav Meštrović is a medical doctor (MD) with a Ph.D. in biomedical and health sciences, specialist in the field of clinical microbiology, and an Assistant Professor at Croatia's youngest university – University North. In addition to his interest in clinical, research and lecturing activities, his immense passion for medical writing and scientific communication goes back to his student days. He enjoys contributing back to the community. In his spare time, Tomislav is a movie buff and an avid traveler.