Scientists define the role for a rare, influential set of bone marrow cells 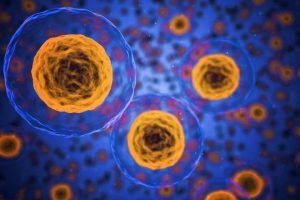 Researchers have defined the roles of various cells in the bone marrow that are thought to control the fate of the nearly half million blood cells that develop there each day.

Scientists at NYU School of Medicine behind the new work say little had been known about the fraction of cells examined in the study, the “microenvironment” that makes up less than 1 percent of the marrow mass in most mammals. Such cells are thought to influence whether early stem cells mature into different types of other cells, such as red or white blood cells.

Reporting in the journal Nature online in April, the study authors describe how they used a combined imaging-mapping tool to track the genetic function one by one of 17,374 mouse bone marrow cells. Having first taken steps to exclude all blood cell types as well as mature fat cells commonly occurring in marrow, they were able to focus on the remaining, elusive cell types in the marrow microenvironment.

Within this microenvironment, the researchers identified nine types of cells and even more subtypes. Most were identified as cells that line blood vessels (i.e., vascular endothelial cells) or stem cells (mesenchymal cells) that make up bone (osteoblasts).

Still, the function of other rare cells types remained unknown. To better understand them, the team treated these remaining cells with chemotherapy to try to mimic the stress faced by such tissues after injury or with disease.

Among the stress-induced changes was that one set of stem cells (also mesenchymal), which typically develop into osteoblasts or muscle cells, in this instance only turned into fat cells (adipocytes). Researchers say this genetic reprogramming, whose turnabout they plan to study further, possibly explains why the phenomenon of excess marrow fat is seen in leukemia patients receiving chemotherapy.

Another study finding was that levels of a signaling protein, vascular Notch ligand delta-like 4 (Dll4), dropped significantly after chemotherapy, causing a shift in a tiny subset of blood stem cells sensitive to these signals.

The shift revealed this population of vascular cells as being responsible under normal circumstances for triggering most of the production of the two major white blood cell types, T cells and B cells, in bone marrow. Researchers believe this is an important advance in anatomical understanding of essential elements in blood cell production (hematopoiesis).

“Our study represents the first detailed assessment of the bone marrow microenvironment, revealing the critical role of subsets of cells involved in cancer chemotherapy and immune cell production,” says study senior investigator Iannis Aifantis, Ph.D., professor and chair of the Department of Pathology at NYU Langone Health and its Perlmutter Cancer Center. “Until now, scientists have often had to rely on observing only the effects of blood cell group actions. These technical advances allow us to get at the underlying processes that cause those effects to happen in real time.”

For the study, researchers used a highly specialized method for tracking gene activity called single-cell RNA sequencing (scRNA-Seq), and tagged single cells with a fluorescent dye to pinpoint their actions, with each cell distinct from similar cells. Prior to this advance in recent years, Aifantis says, scientists were only able to isolate the action of groups of cells in the bone marrow microenvironment, making it much harder to analyze each type or link it to a specific disease.

“Our results show how single-cell tracking and analysis can expose the roles of each cell and cell type, not just in orchestrating blood cell production, but also in triggering and propelling other blood-related disease processes in the body, such as leukemia,” says study co-lead investigator Anastasia Tikhonova, Ph.D., a postdoctoral fellow at NYU Langone.

She says the team next plans to evaluate the effects of other sources of stress—aging, blood cancers, and blood infections—on blood cell production and immune function, and what happens both inside and outside of the bone marrow.