Home » Health Problems » Tackling side effects in head and neck cancer treatment – the end of the road for hyperbaric oxygen?

Tackling side effects in head and neck cancer treatment – the end of the road for hyperbaric oxygen? 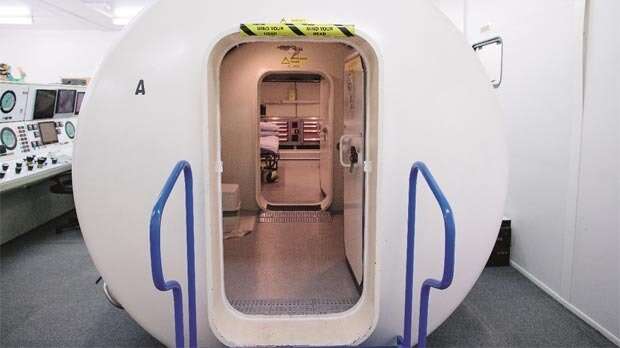 Some side effects appear years after cancer treatment. That’s the case for one side effect of radiotherapy for head and neck cancer, called osteoradionecrosis.

This painful condition results from damage to the jaw bone, which often doesn’t heal properly and can cause bone fractures or even bone death.

It can develop without an obvious trigger, but it’s often linked to dental work like tooth extractions or implants. And it can happen even if the dental work is carried out 20 years after radiotherapy.

Professor Richard Shaw, a Cancer Research UK-funded head and neck surgeon at the University of Liverpool, treats the difficult condition quite frequently through reconstructive surgery.

Shaw says that these procedures are often bigger and harder than patients’ original cancer surgery, because they’ve already had so much treatment in that area.

For that reason, researchers have looked for ways to prevent osteoradionecrosis from developing. And that’s where hyperbaric oxygen comes in. It started with a small trial in the 80s, which has influenced the way doctors prepare patients for dental surgery ever since.

But new trial data, led by Shaw and published in the International Journal of Radiation Oncology, shows the hyperbaric oxygen hype may have been a bit premature.

The trial of hyperbaric oxygen

Back in the 1980s, a small trial in the US showed that giving hyperbaric oxygen before dental surgery could reduce the risk of osteoradionecrosis developing.

“Prevention is obviously a very good idea, but I think there was concern around whether hyperbaric oxygen was the answer,” says Shaw.

A big question that lingered around the treatment was how applicable the 34-year-old trial results were to patient’s today. Radiotherapy has become a lot more targeted than it was a few decades ago, which may affect the risk of someone developing osteoradionecrosis.

“There really was no recent, good evidence for hyperbaric oxygen,” says Shaw.

Adding to that, hyperbaric oxygen treatment takes time. Patients have to travel to a centre with a specialised chamber every day for 30 days.

And finally, the cost. According to Shaw, the NHS is spending somewhere between £5K and £10K per patient on hyperbaric oxygen treatment.

Expensive, intensive and based on potentially shaky evidence. The feeling was that it was time for hyperbaric oxygen to be put back to the test.

Shaw and his team ran a trial testing hyperbaric oxygen treatment in 144 patients who’d had head and neck cancer and now needed dental surgery. Half the patients had a course of hyperbaric oxygen before surgery, the other half didn’t.

Patients were then monitored after dental treatment to see who developed osteoradionecrosis, as well as monitoring pain levels and quality of life.

The first thing the team learnt was that osteoradionecrosis is a lot less common now than it was in the 80s.

“We can now say that with modern radiotherapy, someone’s risk of having this jaw problem is about 1 in 20. Which is a lot lower than the previous trial, which had shown it was around 1 in 3,” says Shaw.

The other big finding was that hyperbaric oxygen had no impact on the number of people developing osteoradionecrosis – the numbers were pretty much the same in each side of the trial.

And although people who had hyperbaric oxygen reported fewer short-term side effects and less pain immediately after surgery, there was no difference in long-term pain or quality of life between the two groups.

“It’s very clear that in our health system, hyperbaric oxygen is no longer justified,” says Shaw. “In some ways it could be reported as a negative finding, because hyperbaric oxygen didn’t work. But I think it has given us a definitive change of practice.”

As well as changing practice, the trial leaves another legacy: patient samples. Shaw is planning to use these to understand more about who develops osteoradionecrosis.

“What you’ll deduce with 6 percent of patients developing osteoradionecrosis in this trial is that 94 percent of people didn’t, even though they were considered high risk,” he says.

Right now, risk is assessed based on where the radiotherapy was aimed, as well as the type of follow-up dental work that’s being done. But Shaw believes risk could be predicted more precisely. The team will now study the patient samples to look if there are any differences in the DNA of patients who went on to develop osteoradionecrosis.

“We’re looking for a genetic signal or a ‘fingerprint’ that identifies people at high risk of osteoradionecrosis that we could validate in future trials,” says Shaw.

For now, Shaw says doctors can help to reduce the risk of osteoradionecrosis by making sure patients’ teeth are in the best possible condition before and after radiotherapy.