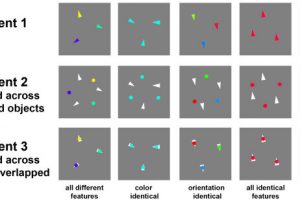 Researchers in cognitive psychology at HSE University have experimentally demonstrated that the colors and orientations of objects are stored and processed independently in working memory. However, it is easier for a person to remember these features when they belong to a single object: for example, it is easier for a person to remember and understand one graph on which both parameters are indicated (with a color and a line shape, for example), than two different graphs in which the two parameters are shown separately.

The results of the experiment were published in Acta Psychologica

At HSE University, a team comprised of Yuri Markov, Natalia Tiurina and Igor Utochkin, studies the processes of visual perception at HSE’s Laboratory for Cognitive Research.

“In this study, we wanted to learn how information is stored in working memory, in particular, whether there are separate ‘shelves’ for storing color and information about the orientation of an object. We wanted to see how this storage manifests itself, firstly, when the color and orientation belong to one object, and secondly, when they belong to different objects,” said Yury Markov, a research assistant at the Laboratory for Cognitive Research at HSE.

However, the researchers observed a decrease in precision when subjects were asked to recall the colors of circles and the orientation of triangles as opposed to recalling both features of a single object.

“These results suggest that working memory is most likely structured hierarchically: objects are stored at one level, while their features are stored at a different level. This makes memorizing information pertaining to a single object easier,” Yury Markov noted.