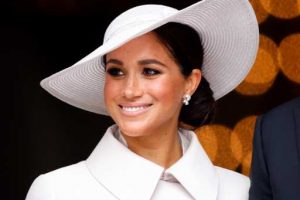 Meghan Markle wears many hats. She’s a former Duchess, actress, activist, podcast host and mom to two children: Archie, 3, and Lilibet, 1.  The multi-hyphenate 41-year-old has dived headfirst into her role as parent, navigating all the incredible parts (she’s called being a mom “magic”!) and the tumultuous ones, including trying to privately raising her kids in the glare of the public spotlight — especially lately, with Queen Elizabeth’s death turning all eyes to the British monarchy and everyone associated with it.

Being a mom has been on Markle’s wish list for a long time now. In 2014, while working as an actress on the show Suits, she told The Brew that her dreams for the future included having a while brood of children. “I dream of being a mom with wee ones running around my house,” she said, adding that her other future hopes included: “to one day have a cooking show, to continue working on social issues at a global level, to run a marathon, to see this glorious world, and to stay grounded, grateful and openhearted.’”

It looks like Markle is well on her way to accomplishing all those goals. And she’s got her husband Prince Harry by her side, taking on the big journey of parenthood together.  “He’s the best dad,” Markle was overheard saying during a 2019 group mindfulness activity in South Africa, per PEOPLE. In turn, Harry declared: “No, she’s the best mom.”

Here, we take a look back on everything Markle has said about the ups, downs, and unique twists and turns of being a mama.