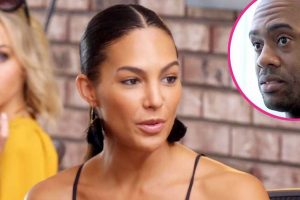 “I have a therapist, and then I get information from her to help them,” the Selling Sunset star, 44, exclusively told Us Weekly of daughter Noa and son Braker on Tuesday, February 23. “A licensed therapist cannot legally help them without [their dad’s] signature. So I talk to someone and then she gives me tips and pointers.”

Noa and Braker are “amazing kids,” the Indiana native went on to tell Us, noting that they “could be flunking out of school, cursing, acting out and not doing chores” with Brown missing.

“They’re not doing any of that,” the Netflix personality explained. They’re the most well-behaved, well-mannered [kids]. They’re so compassionate and so kind. They’re thriving in school and they’re social, but as a mother and an adult, I see what the effects are.”

Smith’s children “were very sad, very heartbroken” when they stopped seeing their dad. The interior designer recalled lots of “tears, sobbing and questioning,” noting they have stopped asking about the former professional football player. Smith said, “I check in with them and we talk about it.”

Smith is currently taking legal action to get sole custody of the little ones, which has the reality star “a little bit stressed.”

She and Brown split in 2012 after two years of marriage and haven’t spoken since September 2019. He said in court documents previously obtained by Us that he has suffered from chronic traumatic encephalopathy since leaving the NFL.

While raising Noa and Braker on her own, Smith is battling mom guilt. “I’m so busy,” the former model said. “We’re home together all the time [amid the coronavirus pandemic], but I’m not getting that quality time. I just have so much going on. … I believe if we don’t have some mom guilt, then maybe we’re not doing it right.”

The real estate agent is “working extra hard” at her job — and doing it for her two kids. “They’re gonna know one day when they’re older,” Smith explained to Us. “They’ll appreciate it. Like, I have to work. I have to wait until they realize and can fully grasp exactly what Mom is doing.”

With reporting by Christina Garibaldi