Home » Kids Health » Being Baba: Thinking back to simpler times

Being Baba: Thinking back to simpler times 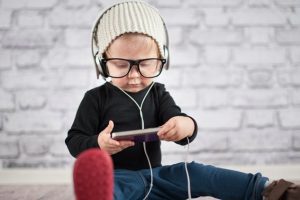 I got my first cellphone when I was in college. Neil already knows how to listen to music on my cellphone and when it is diaper changing time, he’ll bring the phone to me so I can play his favourite songs. All my life I had heard people say “We want our kids to have a better life than we did. We want them to have the things we didn’t.” And things to that effect. And I never really got it. Until I became a father.

Now let’s get this straight, right off the bat. I had an amazing childhood. It wasn’t lavish but I don’t think I ever had a moment where I felt that I didn’t have the things I wanted. It is only now, when I reflect, I realise that it was a much simpler time. Back then a kid’s needs were simpler than they are today.

There’s just so much more available for children and hence the wants and desires of a kid are more. But I want to think back and see how things were different for us. Stroll down memory lane with me, won’t you?

I’m 38 now so I may go back a little more or less than you but I’m going to assume that if you’re a parent right now with a baby…you’re between the age of 25 and 40…so we’ll definitely have some shared experiences.

One of the biggest things these days is the access to so much content – on television, on radio, in the market, on your cell phones — just about every possible way. There’s so much more now.

When I was a kid, we had good old Doordarshan and as I grew a little older we started getting a few more channels. He-Man cartoons, Mahabharata and then when cable tv came along, WWE (then called WWF) were my jam! My son is just 15 months now and while he’s not started watching television yet, I just know it is going to get nuts when he starts getting TV time.

We used to have the good old-fashioned dialler phones and as I grew up, the electric button phones. I think I got my first cellphone when I was in college. Neil already knows how to listen to music on my cellphone and while he can’t really operate it, when it is diaper changing time, he’ll bring the phone to me so I can play his favourite songs for him if the phone isn’t already around. And the music! Gosh! We had cassettes back then and then as I grew older the super expensive cds came in the market. I remember hearing the same album at least a hundred times before I had enough money saved or a birthday or something like that before I could hear another album or new music. My son has already heard more artists in 15 months than I had in 15 years!

Toys! I loved my He-man action figures. And I’d get one on every important occasion. And now…there are SO MANY! This is one reason I’m probably more jealous of Neil than anything else. Wish I had these awesome toys as a kid. I think that’s one of the reasons I have a massive collection of comics, action figures and statues now. These are MY toys. I’ll get him HIS toys to play with. He doesn’t mess with Baba’s stuff!

Nostalgia: Notes on growing up in a free India for kids

Food options were also so much simpler back then. Back then, going out meant, going to your nearest Udipi restaurant or your area ka pani-puriwala. I remember the first time I ate a burger and a pizza. It was momentous. It was glorious! I had never eaten anything like that. And now…now we complain about that “McDonalds is so boring yaar! I want to have a real awesome burger some place.” And we all have our favourite artisanal burger joints or our favourite authentic pizza places. Dominos is so done! When McDonalds and Dominos had opened…they were the bombdotcom (a phrase I heard on a tv show that I’m totally using and am allowing you to steal from me too. Basically it means it was awesome!).

Our clothes were simpler. Remember getting stuff stitched? I mean sure, we got a ton of readymade stuff too, but the special occasion clothes were stitched for us. Now kids have all the best brands. And let’s be honest, they look so much better than the clothes we wore as kids. I’m not dissing our parent’s choice but honestly, things were so limited back then. I love shopping for Neil. He really has the most amazing and cute clothes!

Growing up we travelled by buses or trains. When I was about eight, I think my dad got his first car. It was a Fiat and I remember feeling grand when we got out in it. Now, I’ve just ordered a brand-new Kia Seltos, my third since I started earning and my son is going to have a car with a sunroof and a Bose music system. It absolutely blows my mind.

Oh and finally…the internet! Wish we had that as kids. Life is so much better thanks to the internet. I remember getting the net for the first time as a teen. Remember downloading ONE song on dial up back then. Took hours for a 5mb song. If you got an album by keeping your phone on overnight you felt like a king. You got yelled at the next morning for keeping the phone occupied for sure but it was worth it. Now you can download gigabytes of data in minutes. Everything is online. It is truly the most incredible change I’ve seen in my lifetime. I can’t even imagine what our grandparents must think about the internet. But for our kids now, they will just take it for granted. Good speeds aren’t a luxury. They’re a necessity.

So there you have it. I know he has better clothes, toys, food, transportation and the internet! I think we’re doing quite all right. I can guarantee that we as parents can say that we are giving kids a better life than the one we had and I think we can all feel pretty damn good about it.

Tell me some other memories or things from your childhood that are so different now. Let’s talk!

(The writer is a singer and his debut album Mumbai Blues won the GIMA Award for Best Rock Album in 2015. He hosts his own talk show-The MJ Show and does live Hindi commentary for WWE. Views are personal. Follow him on twitter @mihirjoshimusic)

END_OF_DOCUMENT_TOKEN_TO_BE_REPLACED

END_OF_DOCUMENT_TOKEN_TO_BE_REPLACED
We and our partners use cookies on this site to improve our service, perform analytics, personalize advertising, measure advertising performance, and remember website preferences.Ok