Cardi B Defends Her Toddler's Birkin Bag, Says She'd Be Shamed Either Way 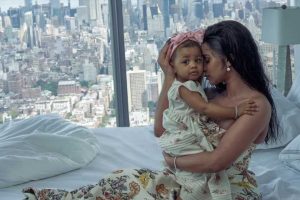 For those of us guilty people-pleasing parents who take others’ “advice” (read: criticism and shaming) to heart far too often, Cardi B is the mom role model we all need. I know, because I’m among the aforementioned guilty. I like to think of myself as open-minded and amenable to feedback, which serves me well in a work environment; it does not, however, serve me well as a parent. Because when you’re a mom doing your damn best and other parents start coming out of the woodwork to tell you your baby looks too hot or too cold, or that you bought them too few things or too many… the best thing you can do is just plain not listen. Queen Cardi B knows this.

And when her daughter Kulture received a Birkin bag from papa Offset for her 2nd birthday? Of course the shamers were out, criticizing the expense and the supposed waste of money/fashion on a mere toddler. Does Cardi care what they think, though? Hell no. And she had the best possible explanation for the expense (new Birkin bags range from about $12,000 to more than $200,000).

Late is better then never I Birkin my baby

So, Cardi B argues, she’s got to make sure her kid is looking as fly as her mom. Otherwise the shamers would come after her for not dressing her kid in high fashion!

“If I’m wearing Cha-nay-nay, my kid’s having the same same, you know what I’m saying?” she continued. “It’s not up to what the kids like. If it was the kids, they’d be outside in diapers. Because if I was looking like a bad bitch, expensive bitch and I have my kid looking like a bum bum, then y’all would be talking shit.”

In conclusion: “I’m not mad that Daddy bought baby a Birkin,” Cardi B adds. “She’s gonna match Mommy.” And the queen has spoken.

Hey, Offset and Cardi B work hard. So if they have the cash and this is how they want to spend it on their daughter, who are we to judge? Plus, there’s something to be said for embracing the knowledge that the mom-shamers will come after you and find something to criticize no matter what you do. So you might as well take the route that gets your kid looking “fly” — and grinning with joy at her brand new birthday Birkin. However absurd that may sound.

END_OF_DOCUMENT_TOKEN_TO_BE_REPLACED

END_OF_DOCUMENT_TOKEN_TO_BE_REPLACED
We and our partners use cookies on this site to improve our service, perform analytics, personalize advertising, measure advertising performance, and remember website preferences.Ok