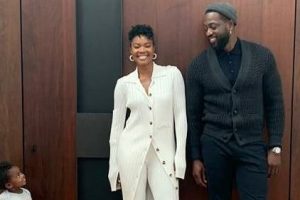 A blended family at its finest! Gabrielle Union and Dwyane Wade love spending time with their big brood.

Prior to the couple’s 2014 wedding in Miami, the former NBA player welcomed son Zaire and daughter Zaya with his then-wife, Siohvaugn Funches, in 2002 and 2007, respectively, followed by son Xavier with Aja Metoyer in 2013.

The retired athlete and Union had a tough time conceiving themselves and the actress opened up about the “eight or nine miscarriages” she suffered in her 2017 memoir. “For three years, my body has been a prisoner of trying to get pregnant — I’ve either been about to go into an IVF cycle, in the middle of an IVF cycle, or coming out of an IVF cycle,” the L.A.’s Finest star wrote in We’re Going to Need More Wine. “Once a month I look like I’m in my second trimester because I’m bloated. It leads to the questions and it leads to the rumors and anytime I go into a doctor’s office I feel like I’m a member of SEAL Team Six undercover because I don’t want people to speculate.”

She and the Chicago native welcomed their first child together in November 2018 via gestational carrier. Three months later, the Nebraska native described the one quality she and Wade looked for when choosing their daughter Kaavia’s surrogate.

“Some people care about the race, religion, or food habits of their surrogate. I was like, ‘I want a reader,’” Union told Women’s Health in February 2019.

While the former America’s Got Talent judge told the outlet she is glad she didn’t have a baby until later in life, Union has been a devoted stepmom to Wade’s kids for years. When the A Father First author was unable to attend the Miami Pride Parade in April 2019, Union brought Zaya and her siblings.

When the preteen came out to her parents as transgender — and Wade shared the news with Ellen DeGeneres in February 2020 — Union introduced her Instagram followers to Zaya, writing, “She’s compassionate, loving, whip-smart and we are so proud of her. It’s Ok to listen to, love & respect your children exactly as they are. Love and light good people.”

Keep scrolling to see her and Wade’s best moments with their brood, from birthday bashes to family vacations.