How Sandra Bullock's Tattoo Reminds Her to Be a Better Parent 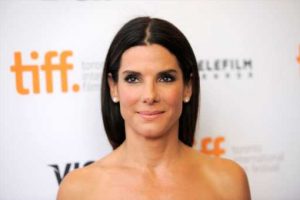 While doing research for her new film, The Unforgivable Sandra Bullock never dreamed she would gain valuable insight into becoming a better mother. The Oscar winner recently shared the heartwarming story — and the tattoo inspired by the moment.

In the film (in theaters November 24 and on Netflix December 10), Bullock stars as Ruth Slater, a woman who is released from prison after serving a sentence for a violent crime. She re-enters a society that refuses to forgive her past, while trying to reconnect with her little sister with the help of her parole officer, played by Rob Morgan.

To research for the role, Bullock met with incarcerated women in order to share “the truth of their journey to how they got there.”

“One of my tattoos was in honor of one of the women that I got to interview that helped me with insight to my daughter,” Bullock recently told Extra. “She, too, went through the foster care system and there was something that was similar, and she said, ‘Oh, my God, that happened to me. That’s who I was.’ I went there to get her story and I left there being a better parent because of the gift that she gave me.”

Bullock adopted her daughter, Laila, 9, in 2015, five years after adopting her son Louis, 11. In a 2015 interview with People, the actress spoke about the patience and reassurance it took to bring Laila home. “I knew she was scared, and all I wanted was for her to know Louis and I weren’t going anywhere,” she said, adding that her daughter brought “pink and glitter in the house mixed with Legos and Batmans.”

After meeting with the woman who inspired her to become a better mother, Bullock got a tattoo to remind her of the special moment. “It was a barbed wire with a butterfly on it,” she revealed.

Seeing how much Bullock cares about being a good mom proves that she already is. This is such a sweet moment that makes us fall in love with the actress even more!

Read about how Heidi Klum, Angelina Jolie, and more celebrity parents co-sleep with their kids.