Jamie Lynn Spears Auditioned for 'Twilight' While Pregnant: 'I Felt So Sick' 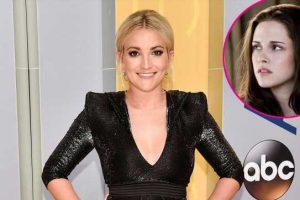 What could have been. Jamie Lynn Spears hilariously reflected on not wanting to audition for Twilight in 2007.

“They had to force me. Force me,” the actress, 29, told Nylon on Monday, October 19, of the role, which ultimately went to Kristen Stewart. “I remember just thinking like, ‘Y’all are insane. I’m not playing a vampire. That is so stupid. Why would I do that?’ But I went and read for that role. I remember sitting in this little room, and I think Lily Collins was there.”

The Zoey 101 alum went on to tell the outlet that she felt “so sick,” adding, “Little did I know, I was pregnant.”

The country singer was 16 when news broke that she and her then-boyfriend, Casey Aldridge, had a baby on the way. The Mississippi native welcomed Maddie, now 12, in 2008.

Spears felt like she was “under a microscope” at the time, she told The Hollywood Reporter in May. “I remember being 16 years old, being pregnant in a small town. And then on top of it, the whole world was watching,” the Sweet Magnolias star explained. “At the end of the day, you have to stand up for what’s best for you and your baby. I think that’s what people didn’t understand about me and my first pregnancy. Every decision I made came from a place of wanting to do right by her and being the best mom that I could be.”

Britney Spears’ Best Quotes About Her Sons Sean and Jayden

The All That alum described herself as a “tomboy” mom in May, saying that her sister, Britney Spears, is more of a “girly girl” while raising her two sons, Sean Preston, 15, and Jayden, 14. “It’s funny that I got the two girls and she got the two boys,” Jamie joked to Access at the time. “She gets to spoil my girls and I get to be hard on her boys, and so that’s just kind of fun to switch roles a little bit as girl mom [and] boy mom.”