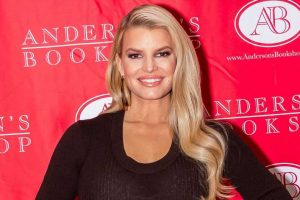 Who’s counting? Jessica Simpson showed off her killer body in a bikini as she counts down to her 40th birthday.

“YEE-HAW to my final days in my 30’s,” she captioned a beachside photo as she showed off her toned butt while wearing a black cowboy hat and mesh wrap over a cow-print bikini from her namesake line.

” My baby … 40 dear Lordy!” her mom, Tina Simpson commented on the sultry pic. “How about that swimsuit?  🤠 Bring on the Rodeo available @JessicaSimpson.com.”

“You look better than ever!” a fan wrote, while another commented that the fashion mogul looked “Beautiful and fierce.”

The former reality TV star has been an outspoken advocate for body positivity over the years and opened up about her own struggles in her memoir, Open Book.

In the book, which was released in February, the “I Wanna Love You Forever” singer revealed she took diet pills for 20 years after being told by a music executive at the age of 17 that she needed to “lose 15 pounds.”

“I started to hear voices when I was alone at night, waiting for the sleeping pill to kick in: ‘Do more sit-ups, fat ass,’” she recalled. “By the time we got to the release of my second album’s first single, ‘Irresistible,’ I was down to 103 pounds. Everyone went on about how great I looked, but I couldn’t enjoy it because I was so freaking hungry.”

She also detailed the moment her eldest daughter, Maxwell, said that a friend told her bread makes you “fat.”

“I thought, ‘How does she even know what ‘fat’ is?’” Simpson wrote of her then-6-year-old. “It was a wake-up call. She already has this world to grow up in, and I want her to feel safe enough to love herself and the body that God gave her.”

Last month the Dukes of Hazzard star spoke out about being body-shamed for her 2007 Met Gala look by Vogue creative digital director Sally Singer.

“She was wearing Michael Kors and her breasts maybe fell out of her dress on the red carpet,” Singer recalled in the magazine’s oral history of the gala. “And then at dinner it was suddenly like, whoa, Jessica Simpson’s breasts are across from me at the dinner table and they are on a platter and I’m looking at them. And [her then-boyfriend] John Mayer was putting his hands on them at the dinner table. He kind of reached down and I just remember thinking, ‘Oh, celebrities, feel free to play here.’ That’s what’s going on.”

“Feeling a little like Jayne Mansfield after reading this (inaccurate!) oral history of the #MetBall where I am body shamed by #SallySinger,” the former Newlyweds star captioned an Instagram photo on May 5 that showed actress Sophia Loren giving side-eye to the late Hollywood sex symbol. “But in all seriousness I have persevered through shaming my own body and internalizing the world’s opinions about it for my entire adult life. To read this much anticipated article about the classiest fashion event there is and have to be shamed by another woman for having boobs in 2020 is nauseating.”

END_OF_DOCUMENT_TOKEN_TO_BE_REPLACED

END_OF_DOCUMENT_TOKEN_TO_BE_REPLACED
We and our partners use cookies on this site to improve our service, perform analytics, personalize advertising, measure advertising performance, and remember website preferences.Ok