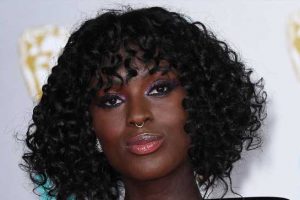 Proud of her post-baby body! Jodie Turner-Smith posed in a crop top nearly one year after giving birth to her first child.

The actress, 34, snapped a mirror selfie in her bathroom on Thursday, February 18. The model wore a tan sweater and purple sweatpants in the photo with other outfits hung on hangers behind her.

The Queen & Slim star and her husband, Joshua Jackson, welcomed their baby girl in April 2020. “Both mother and baby are happy and healthy,” a rep for the pair told Us Weekly at the time.

Becoming a parent has been the “happiest whirlwind” for the actor, 42, he wrote via Instagram while celebrating Turner-Smith’s birthday in September 2020. “Thank you for choosing to share your light with me. Thank you for walking this path of life as my wife. Thank you for bringing our daughter into the world. I can’t wait to see what all the years to come bring our way.”

Us broke the news in December 2019 that the Dawson’s Creek alum had married the Nightflyers star, and she was pregnant with their first child. Jackson is “so supportive of Jodie and loves to cheer her on,” a source told Us at the time.

The couple found out about her pregnancy “together,” he told Access Hollywood three months later. “We kind of had an inkling,” the Canada native explained in March 2020. “Cycles change. This was literally the most joyous moment of my life. She was working out of town and I asked her to hold off a couple days before taking a test so we could do it together.”

The Little Fires Everywhere star gained “sympathy weight” during Turner-Smith’s pregnancy, he went on to tell the outlet. “The only odd craving [I had] was an Oreo milkshake,” Jackson joked.

Neither of them were surprised to find out that they had a baby girl on the way. “My family doesn’t really have boys, so I knew,” the Affair alum explained. “[Finding out] was more about her curiosity.”

The pair first sparked dating speculation in November 2018, obtaining a marriage license in August of the following year. Turner-Smith gushed about her “really amazing” husband in September 2020.

“I’m really in love with [him],” she told Net-A-Porter at the time. “That might be weird for people, but I’m doing a pretty good job of not shouting that from the rooftops as much as I would like to.”