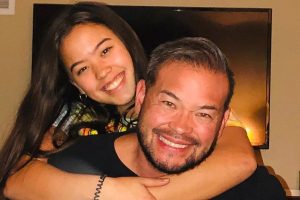 Jon Gosselin shared a photo with one of his five daughters, Hannah, for the viral Kobe Bryant #GirlDad tribute.

The former reality TV star, 42, posted the photo on Instagram on Friday, December 31. It shows the 15-year-old with her arms wrapped around her father as they both smile while posing in front of a fireplace at home in Reading, Pennsylvania.

“Love seeing this. This is so cute,” one fan wrote, while another commented, “Father-daughter Love!!!”

Another alluded to Jon’s estranged relationship with his some of his other children, who he shares with ex-wife Kate Gosselin.

“Love Hannah!!” the fan wrote. “Sure wish your other 4 daughters would start to come around. Just because they haven’t yet doesn’t mean they won’t! Keep fighting for them.”

Hannah and her brother Collin, also 15, live with Jon, while the remaining sextuplets, Alexis, Aaden, Joel and Leah, live with Kate. Twins Cara and Mady, 19, are currently in college.

The #girldad hashtag spread across social media after ESPN anchor Elle Duncan told a story about a conversation with the NBA legend before his January 29 death in a helicopter crash at the age of 41. Bryant, who had four daughters with wife Vanessa Bryant, told Duncan, “I would have five more girls if I could. I am a girl dad.”

Jon and Kate, 44, finalized their divorce in 2009 after 10 years of marriage but have battled over the children ever since. Most recently, Jon went to court in 2019 to prevent Kate from allowing TLC to film the kids. She was found in contempt of court after an episode of her Kate Plus 8 series aired without proper work permits for the teens.

This came after a judge had previously ruled that it wasn’t in the children’s “best interests” to be filmed.

In October, the DJ told Us Weekly that he doesn’t think he and his ex-wife will ever be able to agree on what’s best for their kids.

“I don’t think coparenting is ever going to exist between us because we are never going to see eye to eye,” he told Us. “We have completely different parenting styles and she still wants to film, but I’m never going to sign work permits. That already went to court and I won but she went against my legal rights.”

He added that he doesn’t get to see his other six kids because Kate “puts roadblocks in the way.”

Kate has spoken out about her issues with Jon in the past, writing in a 2013 statement on her blog that she finds it “very heart breaking that my children’s father chooses a public forum to discuss his current opinions of the ‘development’ of our children. These opinions are, in reality, value judgements made about our children and they are based on his limited visits (albeit mutually agreed upon) with our children.”