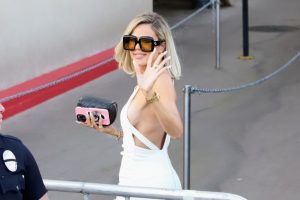 We seemingly get to watch the Kardashian-Jenner family bond in real time via their various social media channels, as was the case with North West’s TikTok montage of their Thanksgiving get-together on Thursday.

But many of their sweetest and most exclusive family moments are still saved for their TV show, Hulu’s The Kardashians, which wrapped up season two with a finale that aired Wednesday evening.


The last episode of the season was a particularly pivotal one for Khloé, who spent much of the season preparing for the arrival of her second child, a son, with ex-partner Tristan Thompson. The little one, whose name still hasn’t been released publicly, was welcomed via gestational carrier.

The episode flashes back to July 28th, when Khloé’s surrogate goes into labor early. Kim picks Khloé up to head to the hospital, so Khloé could be there when the little one was born. Tristan and Khloé’s oldest, True, was seen meeting her little brother via FaceTime. “Do you think he’s cute?” Khloé asked her daughter.

Later, grandma — aka “Lovey” — Kris, came to meet the baby at Khloé’s house. Kris called the baby “delicious,” and said, “a new baby in the family is magic.”

Noticing that the little one looks a lot like Khloé’s brother Rob, Kris had a suggestion for the baby’s name. “How about Rob?” she said, referencing Robert, the name of both Khloé’s brother and late father. “How about Rob Kardashian-Thompson? And then just call him Rob Kardashian?” That’s a sweet idea, but definitely a set-up for some confusion! (We think she was joking, anyway).

Khloé has a lot on her plate with a four-year-old, True, and a four-month-old. She credits both exercise and getting enough sleep for staying sane throughout the year, but especially during the holidays.

In a recent interview with her sister Kourtney, Khloé spoke about the importance of a good nap. “We don’t get to nap very much, but I love a nap,” she said.  “I think I discovered during Covid that I love a nap. I think I just like to lay horizontally. I don’t even need to sleep. I just like to chill a little bit. I’m a bad girl. Just like to lie and watch TV.”

But once in a while, sleep doesn’t come easily for Khloé — and she has a plan. “Sometimes you’re wide awake and that is it,” she said. “So there’s no hope of going back. And sometimes I’ll watch a show. Sometimes I’ll edit an episode or I’ll just start my day. Now that True’s in school, I’m like, “Whatever, I’ll just get up and pack her lunch and do that whole thing earlier than expected.”

Before you go, check out these celebrity parents who welcomed their babies via surrogate.