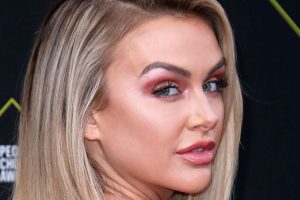 Pregnant Lala Kent spoke candidly about the complications she’s experienced ahead of her daughter’s birth.

“At six weeks, I started bleeding,” the Vanderpump Rules star, 30, wrote via Instagram on Wednesday, February 24. “I went to the emergency room, already knowing what they could tell me. They took me into a room for an ultrasound and I laid there quietly. … For the first time, I heard the pitter patter of my baby’s heartbeat. ‘Your baby is still there.’”

The Bravo personality was “nervous” from that point on, she went on to write. “For the next three weeks, I would continue to randomly bleed and each time, I would call my OB and be beside myself. Although bleeding during pregnancy isn’t normal, it is common. My bleeding was the result of a clot. I was put on bed rest until it was gone.”

At the reality star’s 20-week appointment, she was told that her doctors were “concerned” about her baby girl’s growth and wanted her to return in two weeks.

“The next appointment, there was growth — not much, but some,” the “Give Them Lala … With Randall” podcast host wrote. “After a few weeks, my doctors concluded that this was a placenta problem, not a kid problem. Although we never want any problem, this was a relief.”

Kent explained that 34 weeks into her pregnancy, her “placenta is [now] measuring more mature.”

The Give Them Lala Beauty creator concluded, “I am going to appointments two days a week. They continue to monitor her heartbeat and her growth. When they notice her growth start to slow is when they will make the call to take her out. This could be anywhere from 35 to 37 weeks. In one to three weeks, I could be delivering my angel and all I keep praying for is she comes out healthy. That is all I think about every day, all day.”

The Utah native announced her pregnancy news in September 2020, opening up about her bed rest the following month. “[It was] due to a blood clot,” the mom-to-be said in an October 2020 Instagram Live.

Kent’s fiancé, Randall Emmett, is already the father of two daughters with his ex-wife, Ambyr Childers — London and Rylee. The producer, 49, feels “lucky” to have Kent stepparenting his girls, Emmett exclusively gushed to Us Weekly in May 2020. “It is not easy,” the Florida native explained. “And she, at her age, just stepped up.”