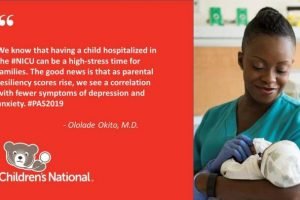 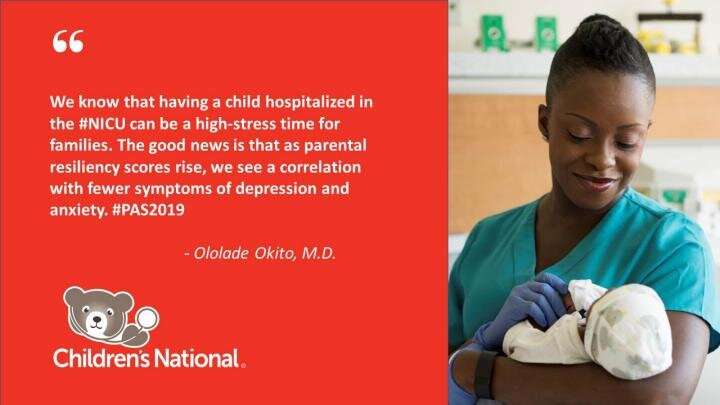 Parents of older, healthier newborns who had less social support were less resilient during their child’s hospitalization in the neonatal intensive care unit (NICU), a finding that correlates with more symptoms of depression and anxiety, according to Children’s research presented during the Pediatric Academic Societies 2019 Annual Meeting.

Resiliency is the natural born, yet adaptable ability of people to bounce back in the face of significant adversity. Published research indicates that higher resilience is associated with reduced psychological distress, but the phenomenon had not been studied extensively in parents of children hospitalized in a NICU.

“We know that having a child hospitalized in the NICU can be a high-stress time for families,” says Ololade Okito, M.D., lead author of the cross-sectional study. “The good news is that as parental resiliency scores rise, we see a correlation with fewer symptoms of depression and anxiety. Parents who feel they have good family support also have higher resilience scores.”

The project is an offshoot of a larger study examining the impact of peer mentoring by other NICU parents who have experienced the same emotional rollercoaster ride as their tiny infants sometimes thrived and other times struggled.

The research team enrolled 35 parents whose newborns were 34 weeks gestation and younger and administered a battery of validated surveys, including:

Forty percent of these parents had high resilience scores; parents whose infants were a mean of 27.3 gestational weeks and who had more severe health challenges reported higher resilience. Another 40% of these parents had elevated depressive symptoms, while 31% screened positive for anxiety. Parental distress impairs the quality of parent-child interactions and long-term child development, the research team writes.