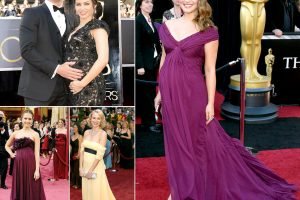 What to expect when you’re expecting — at the Oscars! Pregnant stars including Emily Blunt, Chrissy Teigen and Anne Hathaway have glamorously showed off their growing baby bumps at Hollywood’s annual event.

Whether they were nearing the end of their third trimester, barely sporting a belly, or never even disclosed a bun in the oven, so many celebs have made pregnancy look easy on the Academy Awards red carpet.

In fact, Teigen has done this not once, but twice! The Lip Sync Battle cohost showed up to the 2016 Oscars in a Marchesa dress that she had to be sewn into. The stunning gown, which featured a plunging neckline and red accents, hugged her baby bump. Her husband, John Legend, cradled her stomach as they posed for pics.

Later that same night, the pair attended the Vanity Fair Oscar Party where Teigen showed off yet another maternity look. The mom-to-be, who was expecting her first child at the time, went for a wildly different look when she showed up with a shimmery black gown draped over her baby bump.

Even while attending can be glamorous, Teigen proved that it’s just as fun to indulge in those pregnancy cravings. Even though she and her husband were expecting their second child together in 2018, the Sports Illustrated Swimsuit model skipped the Oscars that year.

“I have cancelled Oscars Sunday and am trying to track down the taco truck featured in Ugly Delicious,” she tweeted at the time. “Does anyone around 6 months pregnant need a dress?” Not only did Teigen receive responses with the name of the truck, but many pregnant women wanted to get their hands on her gown.

Take a look at the gallery below to see how the mother of two, as well as Jenna Dewan, Ciara and more, chose to style their baby bumps on the red carpet. 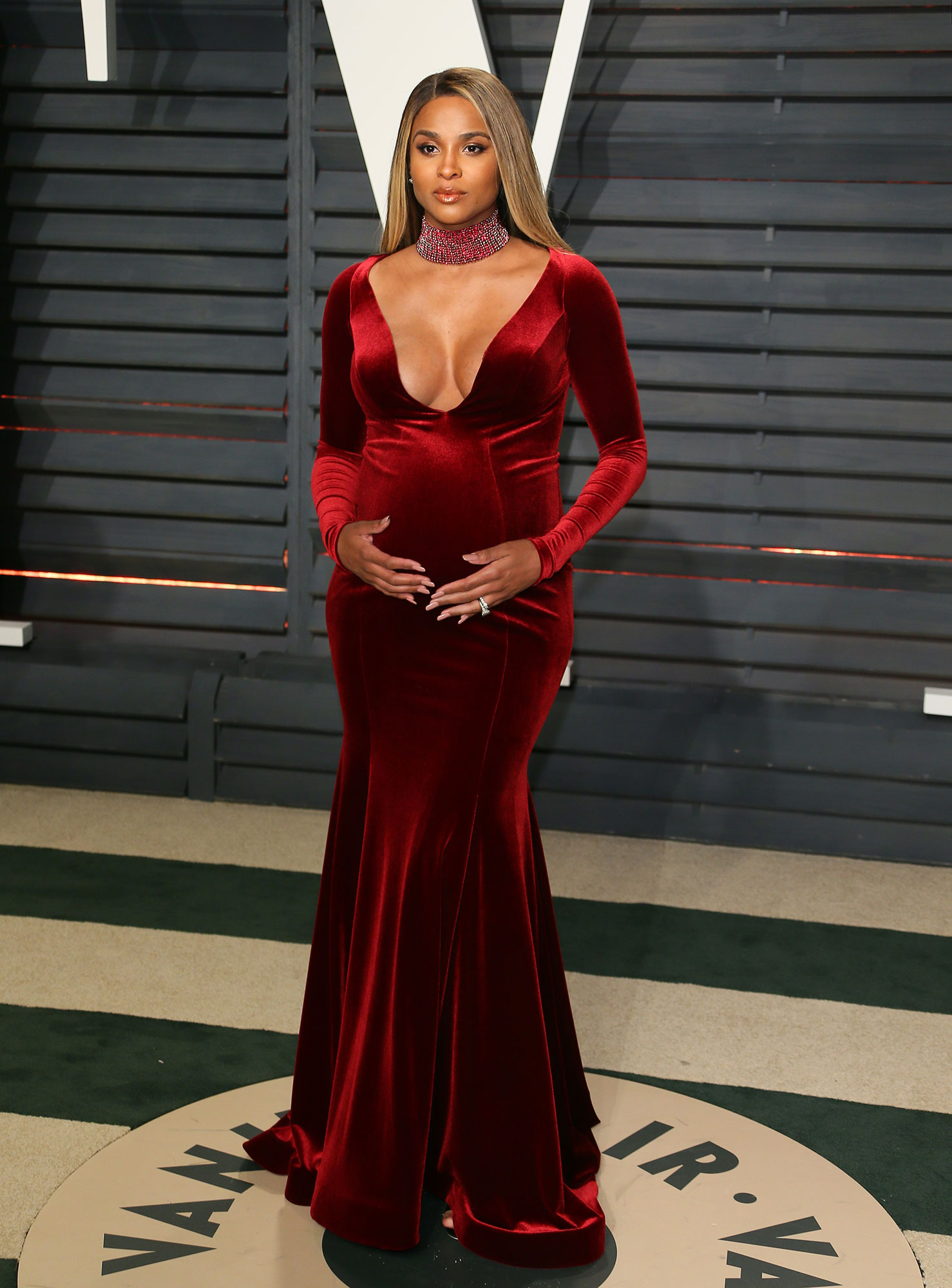 Radiant in red! Ciara matched her plunging velvet dress to a bejeweled choker at the Vanity Fair Oscar Party in 2017. The singer’s first child with her husband, Russell Wilson, arrived two months after the awards show. 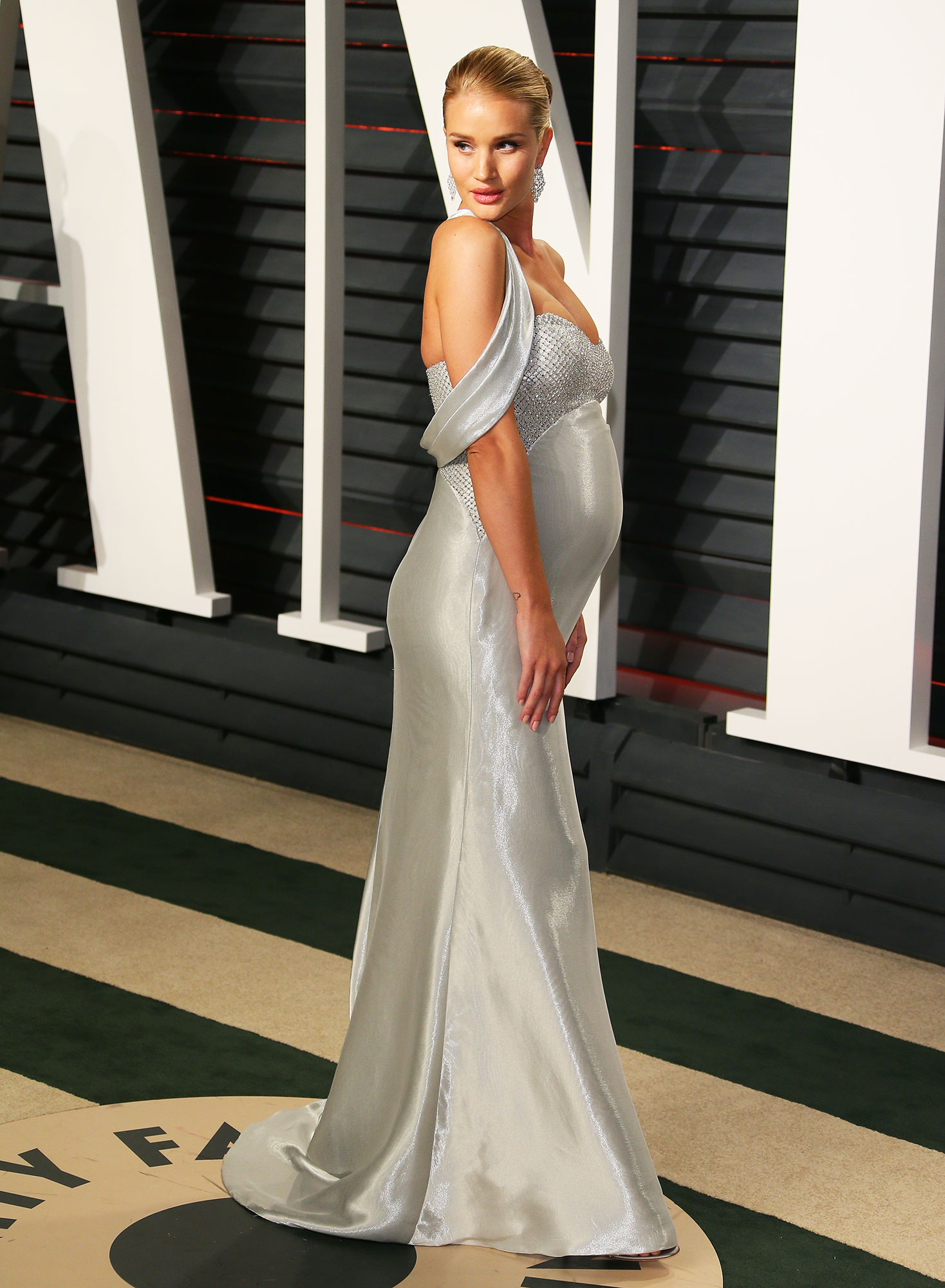 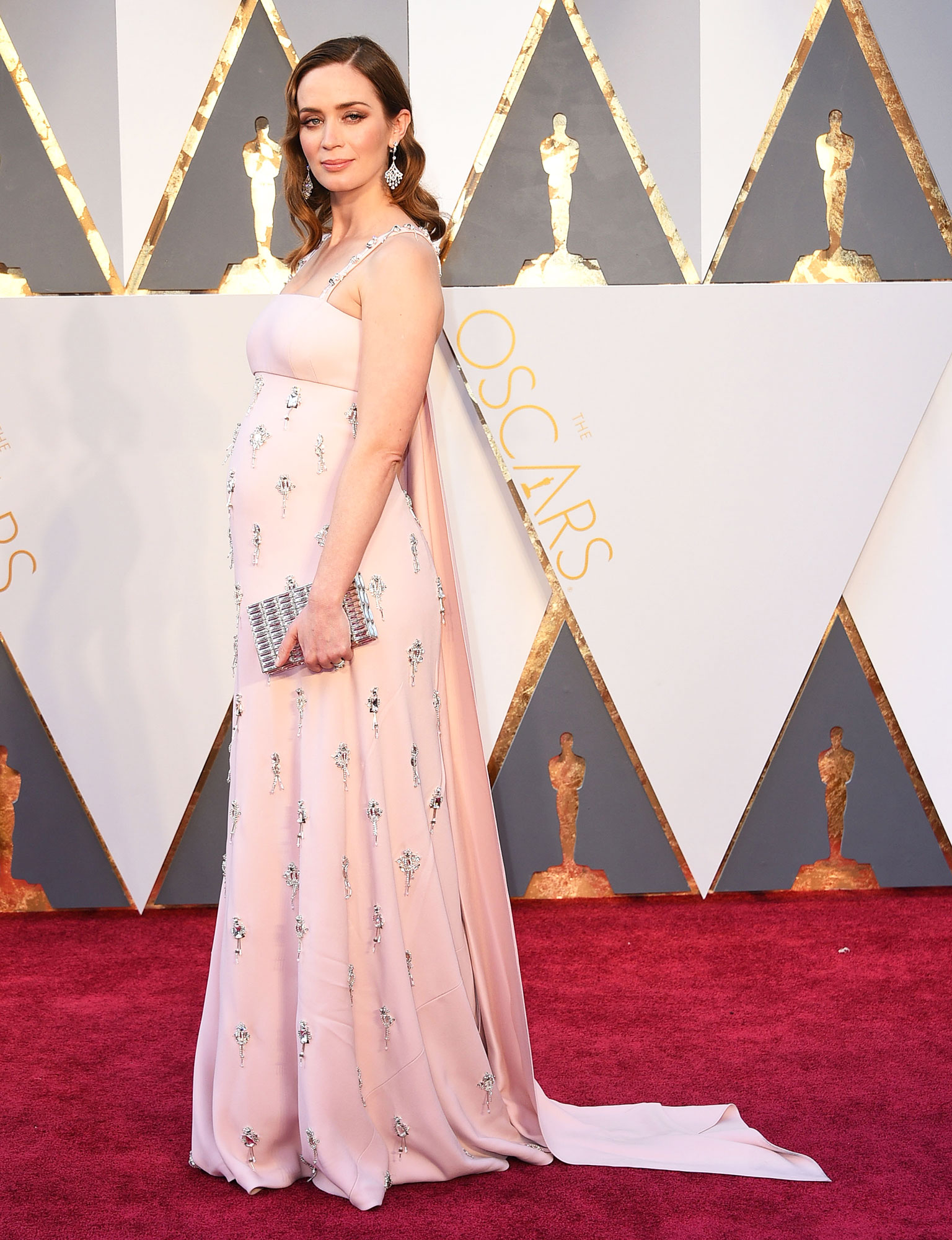 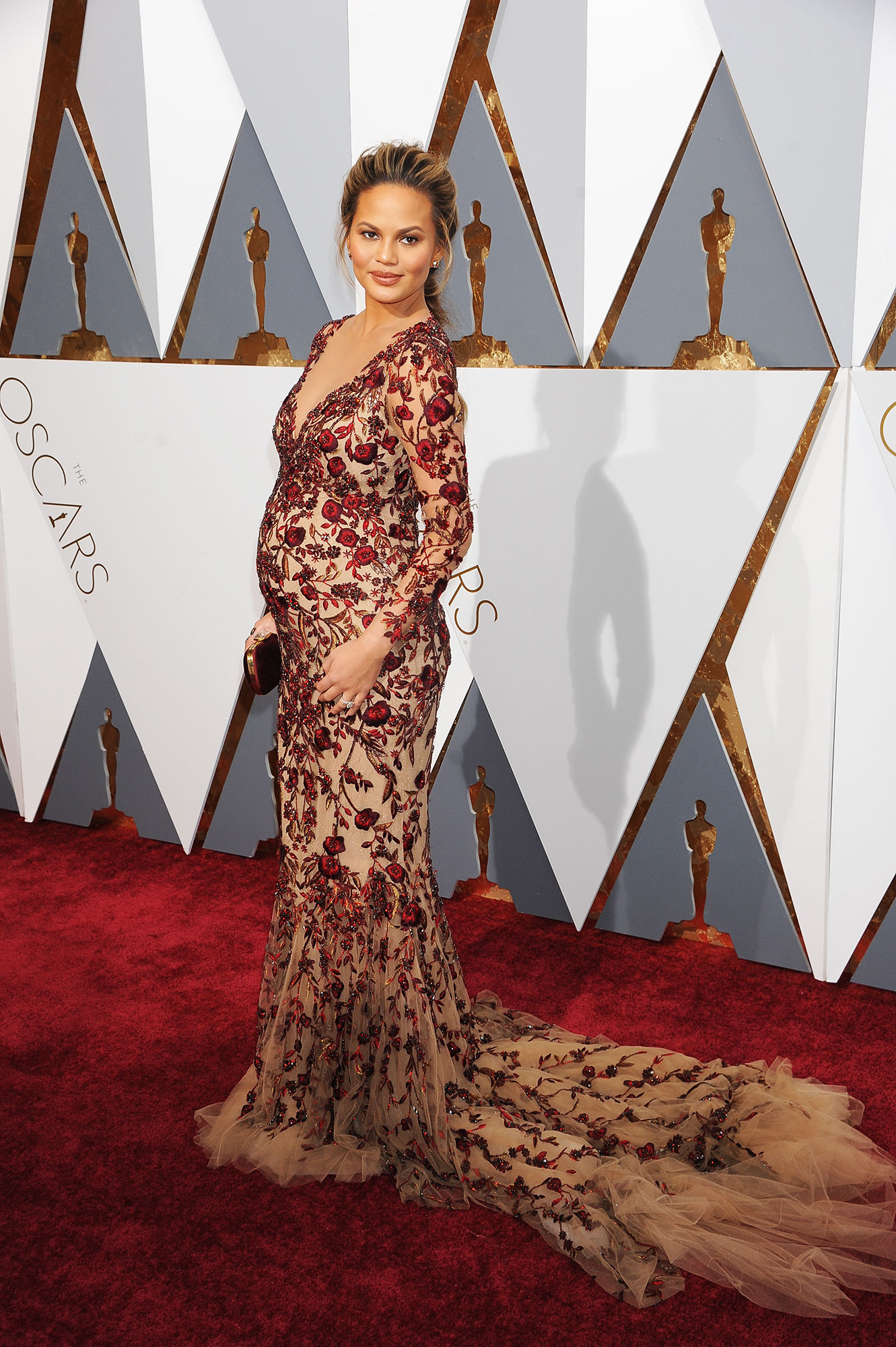 The Lip Sync Battle cohost arrived at the Oscars in a gorgeous Marchesa gown that she had to be sewn into just hours before the 2016 ceremony. Teigen’s husband, John Legend, cradled her baby bump on the red carpet. 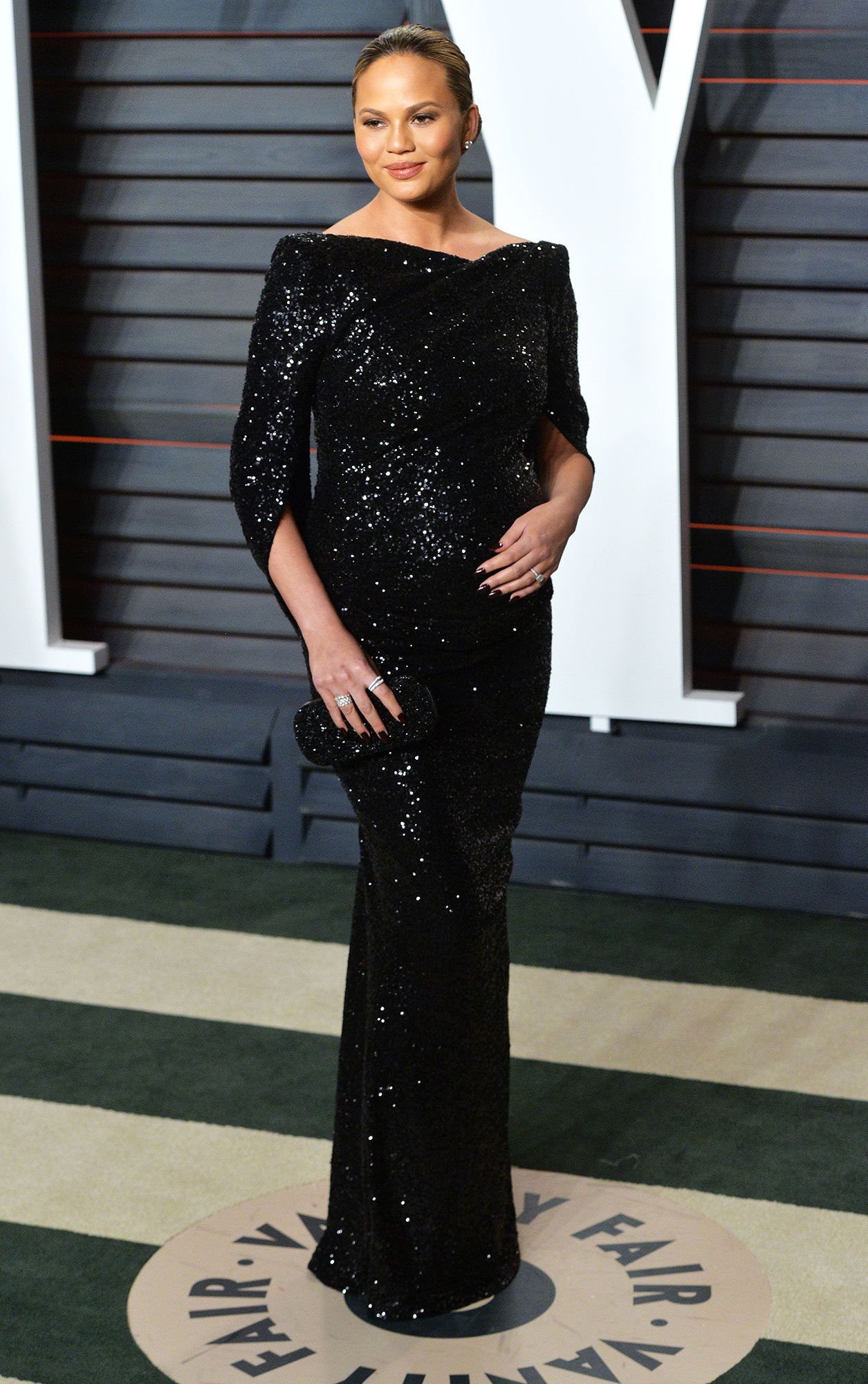 Why stop at one? Teigen showed off her budding belly a second time at the 2016 Vanity Fair Oscar Party. This time, she looked chic in a sequined black dress. The model gave birth to her daughter, Luna, less than two months later.