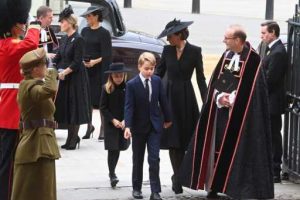 As a parent, it’s hard to imagine not only making sure your children are well-behaved while attending their first funeral services, but also following all the proper protocol while the eyes of literally the entire world are upon you. When you’re a young royal, though, how to behave appropriately in the spotlight is ingrained in you from a very young age — as was evident when Prince George, 9, and Princess Charlotte, 7, were nothing but poised and proper during the funeral of their great-grandmother Queen Elizabeth II.

The children — who are now second and third in line for the throne — were a very important addition to the Royal Procession, walking behind the Queen’s coffin with their parents, Prince William and Kate Middleton (now the Princess of Wales), and just ahead of their aunt and uncle, Prince Harry and Meghan Markle, Duke and Duchess of Sussex. Princess Charlotte wore all black with a wide-brimmed hat, and Prince George was somber in a navy suit.

Notably missing was 4-year-old Prince Louis, because everybody knows that a high-stakes funeral is not exactly the place for a 4-year-old — especially given Prince Louis’s amusing (and highly typical for his age group!) behavior during the Queen’s Platinum Jubilee pageant in June. His cheeky antics were dragged in the press even then, and that was definitely a more lighthearted occasion, so it’s no wonder that the decision was made to leave him out of the royal procession.

Prince George and Princess Charlotte, though, are experienced enough with public events to understand the expectation and the gravity of the situation, and they looked every bit the composed little monarchs with hands clasped and eyes downcast. 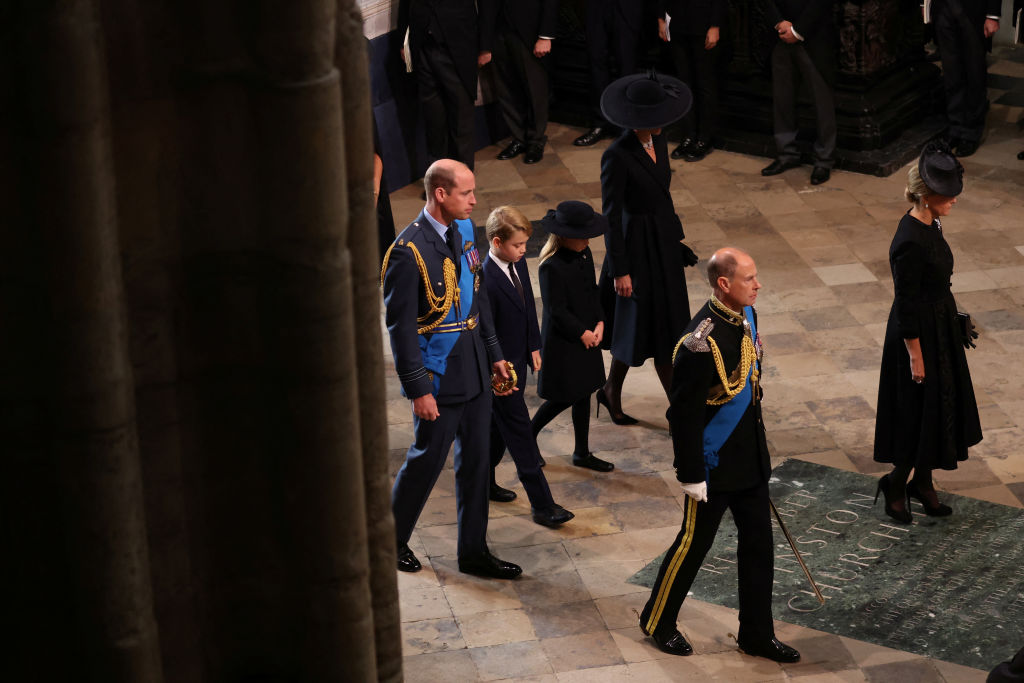 It was speculated that the young royals were included in the funeral services in part to assure the public of the security of the royal bloodline — but they’re also kids who are experiencing a death in the family, and funerals are a big part of the mourning process, even for children.

“Funerals are important family rituals. When they are done well, they can be highly therapeutic events. They reinforce the reality of the death — often critical for a child,” notes Kenneth J. Doka, Ph.D., in Psychology Today. “As soon as children are able to sit still or react appropriately at family events, they should be given a choice about funerals.”

Of course, even though Prince George and Princess Charlotte understand royal protocol and were able to act like mini-adults during the funeral, they may not fully grasp the concept of death. “Kids tend to pop in and out of grief in a way that adults don’t,” says Jamie Howard, Ph.D., in the Child Mind Institute’s blog. “They also have different capacities to understand the permanence of death. An eight-year-old will understand it better than a younger child, but still won’t have an adult understanding.”

Prince George, Princess Charlotte, and Prince Louis were reportedly close to their great-grandmother (Prince George called her “Gan-Gan”), and Prince William reflected on this in a statement after the Queen’s death. “My three children have got to spend holidays with her and create memories that will last their whole lives,” he said. “I knew this day would come, but it will be some time before the reality of life without Grannie will truly feel real.”

A post shared by The Prince and Princess of Wales (@princeandprincessofwales)

Prince William and Kate Middleton have been trying to keep things calm and steady for their children in the wake of their great-grandmother’s death. Per People, mourner Elaine Gee chatted with Prince William at a walkabout last Saturday, saying, “He spoke about George, Charlotte and Louis, saying that they were trying to keep some sense of continuity for them at school and keep things as normal as possible.” As the Queen’s health declined, Kate Middleton stayed behind to pick up her children from school rather than immediately join the rest of the royal family in Scotland.

Hopefully, the funeral of Queen Elizabeth II will provide some closure — not just to the nation she led for 70 years, but to the family she left behind … even the youngest members.

To most, she was Queen Elizabeth II — but to some, she was simply “Granny”.