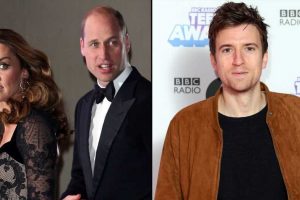 Protective of their family. Prince William and Duchess Kate took host Greg James to task after he made a joke about Princess Charlotte on his BBC Radio 1 show, Breakfast With Greg James.

“They were listening on the morning Charlotte went to school,” James, 33, told U.K.’s The Mirror earlier this week. “I saw the photo during the show and said, ‘Who the hell shakes hands with their teacher on the first day?’”

As fate would have it, the DJ found himself face to face with William and Kate, both 37, when BBC Radio 1’s Teen Heroes visited Kensington Palace. “They said, ‘We were listening on the morning of little Charlotte’s first day, and we want to talk to you about the handshaking thing …’ I went, ‘Oh, God, no!’” he recalled. “They’d heard me saying this school was so posh they had to shake hands with their teacher every day. They were not like that in my day. You were pleased if you got a smile.”

James noted that he seems to be on good terms with the royal couple — who are also parents of Prince George, 6, and Prince Louis, 19 months — following the incident. “I’m sure it’s all absolutely fine,” he said.

Charlotte, 4, started kindergarten at Thomas’s Battersea, where brother George also attends, in London in September. The Duke and Duchess of Cambridge accompanied their daughter as she greeted head teacher Helen Haslem with a handshake outside the private preparatory school after watching George do the same.

William and Kate later posted a snapshot of their two eldest children in matching uniforms. “The Duke and Duchess of Cambridge are very pleased to share a photograph of Prince George and Princess Charlotte at Kensington Palace this morning,” they wrote via Instagram in September. “The photo was taken shortly before Their Royal Highnesses left for Thomas’s Battersea.”

The duke expressed Charlotte’s delight at attending the school while dropping off her and George. “First day!” he told Haslem. “Very excited.”

George, for his part, has been a student at Thomas’s Battersea since September 2017. Kate was unable to make it for his first day because she was suffering from acute morning sickness while pregnant with Louis.

END_OF_DOCUMENT_TOKEN_TO_BE_REPLACED

END_OF_DOCUMENT_TOKEN_TO_BE_REPLACED
We and our partners use cookies on this site to improve our service, perform analytics, personalize advertising, measure advertising performance, and remember website preferences.Ok