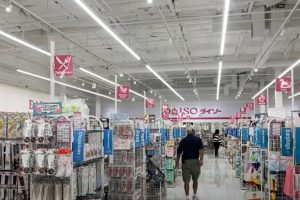 Nothing is ever quite as it seems at Daiso, the Japanese dollar store that’s slowly and quietly making inroads into America’s retail scene. First opening in the US in 2005 ,and now with 80 stores across several states, Daiso is unashamedly pink and full of quirky gadgets. It boasts an extensive collection of delicate Japanese crockery, quality cutlery, and kitchen solutions that you didn’t know you needed (like its popular plastic dumpling maker, which allows you to fold and seal dumplings in seconds.)

Daiso also carries a range of storage options that may not be as austere or as Zen-like as those espoused by another popular Japanese export, Marie Kondo, but will do the trick just the same. Plus, if you’re on the lookout for cheap, reliable beauty supplies, Daiso’s the place to go. The American version of the store even has a special “Japanese” section, where you can find traditional wall hangings, paper fans, eye-catching Japanese washi paper, as well as wooden clogs.

“Our concept is more like a neighborhood store,” says Yoshihide Murata, senior vice president of Daiso (via LA Weekly). He adds that the company first targeted parts of the US with large Asian populations, because “Asian customers, they likely already know Daiso’s name.” The store is now expanding to reach a broader customer base, particularly women who are interested in Japan’s ever-changing fashion and pop scene. In fact, 75 percent of Daiso’s customers are middle-class females of all ages.

The store also offers items are a little more unique than you’d find in the typical American dollar store. Credit goes to Daiso having its own design team, as well as its own plastics factory in Thailand, so it can create original products not found elsewhere.

Daiso might position itself as a Japanese dollar store, but technically, it’s not. International sites have pointed out that Daiso Singapore’s items are about $2 each (via Moneysmart), and the cost of items at Daiso Australia is about $2.80 (via Sydney Morning Herald). Closer to home, items in the Daiso stores on the East Coast are priced at about $2, which is higher than the $1.50 charged in West Coast stores. Daiso executives have told Forbes, that the difference offsets the cost of higher rent.

But Daiso shoppers don’t seem to mind the small price difference, particularly since it offers Asian fans items that they aren’t likely to find at a Dollar General, Dollar Tree, or even Target. With all its cutesy gadgets and collection of fun yet functional goods, it sounds like a trip to Daiso may be well worth it.

END_OF_DOCUMENT_TOKEN_TO_BE_REPLACED

END_OF_DOCUMENT_TOKEN_TO_BE_REPLACED
We and our partners use cookies on this site to improve our service, perform analytics, personalize advertising, measure advertising performance, and remember website preferences.Ok