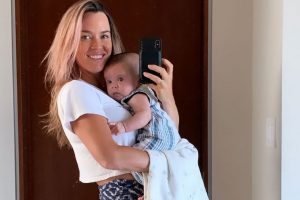 On the road to recovery. Teddi Mellencamp sat down with Moms Like Us host Christina Garibaldi and Stroller in the City’s Brianne Manz to give an update on her daughter Dove’s health after being diagnosed with lambdoid carniosynostosis and undergoing neurosurgery in July. Watch the latest episode of Moms Like Us above to hear how the 7-month-old is recovering.

“She’s doing great. She’s wearing the DOC band, which is the helmet,” the reality star, 39, explained. “The first couple of days, it’s always a little rough ’cause they have to get used to [it on their] skin and it’s hot, but she’s doing great.”

The Real Housewives of Beverly Hills alum said she couldn’t imagine her or her husband, Edwin Arroyave, going through the same thing as their newborn.

“Babies are so resilient. It was so hard leading up to it,” she said. “If myself or my husband [were] going through that, what would [we] have been like? She just wanted to be held and loved and you know, she pushed. Such a fighter.”

“I’m glad we caught it when we did because had we not, we’d be in an even tougher situation,” she told Us.