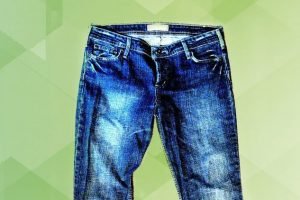 The cloth, dyed blue with Indian indigo, came from Genoa in Italy, which led to the word jeans. When weavers from Nimes in Italy tried to reproduce it, their fabric became De Nimes, which eventually became denim!

(This is part of the series Make History Fun Again, where the writers introduce historical facts, events and personalities in a fun way for parents to start a conversation with their kids.)

Who hasn’t worn blue jeans? Today, they are simply everywhere, from the USA to Ghana to Vietnam. Here is the story of the unexpected relationship between the world’s most popular clothing item and India.

It all started with indigo. A beautiful, rich blue dye could be extracted from the variety of indigo plant found in India (Indigofera tinctoria). Other varieties of indigo were found in various tropical countries, but India was the indigo centre of the world; Harappans first started making this dye 5,000 years ago!

Indigo dye gradually became a luxury export across the ancient world. As the colours blue and purple are relatively rare in nature, they were the most valuable dyes. In fact, the colour purple, extracted from the shells of molluscs, was reserved solely for royal use in Rome, and anyone who dared to wear purple clothes could be executed for his audacity!

The ancient Greeks called it ‘indikon’, meaning ‘from India’, which the Romans copied (like many other things!), and it became ‘indicum’ in Latin, eventually evolving to ‘indigo’ in English. Funnily enough, as the Greeks always received the dye in hard, powdery cakes, they were sure it came from a blue-coloured mineral like lapis lazuli. It was many centuries later in the 13th century that Marco Polo took back the startling knowledge that indigo dye came from a plant and not a stone!

Ancient Egyptians, Greeks and Romans used indigo not just to dye clothes, but to make crayons, paint and even make-up like eye-shadow!

Indigo remained very rare and expensive in Europe through the Middle Ages, and another local plant called ‘woad’ was used to derive blue dye. Once Vasco da Gama discovered a sea route to India, the popularity of Indian indigo in Europe began to skyrocket.

In fact, indigo quickly became one of the most valuable imports for the East India Company, so much so that it was called ‘Blue Gold’! This caused a collapse in the local woad dye industry, and France and Germany actually outlawed imported indigo to protect their local manufacturers (quite ineffectively). Funnily enough, the French law that threatened dyers with death if they were found using indigo instead of woad has never been formally repealed!

Indigo splashes across the world

As the dye was so valuable, indigo plantations began to be set up across Spanish South America and British Colonies of the New World like Jamaica and North Carolina. These colonial plantations ran on cheap forced labour, and provided stiff competition to the East India Company’s Indian-grown indigo.

Indigo became so profitable that it actually became a global currency in itself! Over time, South American indigo merchants became enormously rich and powerful, getting involved in their countries’ politics, including in the tensions with their mother country Spain, and contributed to the upcoming revolts and eventual independence.

The British conquest of Bengal in 1757 overlapped with an increase in demand for indigo in Europe. Due to the American Revolution of 1775, indigo supplies from the Americas were disrupted and the British East India Company now turned back to India for indigo.

Unlike many British island colonies, India did not have widespread introduction of plantation agriculture, where large tracts of land, owned by Europeans, were farmed by slave labour.

This was about to change. European planters came over to set up privately-owned indigo plantations across Bihar and Bengal. When local peasants proved reluctant to grow the capricious indigo crop – so prone to failing – instead of food crops like rice, they were reportedly ‘persuaded’ by tactics like flogging, beating and illegal seizing of land until the farmers agreed.

The method to convert the plant into the dye was backbreaking and unpleasant, and indentured labourers were brutally overseen by European managers.

Eventually, the Company set up a closed circuit of trade between the indigo planters and the British textile industry, exporting millions of kilograms of indigo from India every year. This led to the collapse of the North and South American indigo industry.

The working conditions of the Indian indigo farmers and labourers became increasingly unbearable as time went on. They were tricked by the planters into loans that were impossible to repay, leading to generation after generation of indentured labourers who were forced to work at starvation levels for their entire lives.

This mistreatment led to an 1859 revolt against the planters, which was brutally crushed. In 1897, synthetic indigo was invented by a German and world production of plant-indigo fell steeply and gradually disappeared.

The invention of jeans

Back in the United States, a recent German immigrant called Levi Strauss made his way to California, which was in the throes of its manic Gold Rush. He realised that miners and factory workers needed sturdy clothes. Together with a tailor called Jacob Davis, he patented sturdy blue cotton jeans in 1873, adding the distinctive metal rivets–that are so recognisable today–as a way to prevent ripping.

The cloth, dyed blue with Indian indigo, came from Genoa in Italy, which led to the word jeans. When weavers from Nimes in Italy tried to reproduce it, their fabric became De Nimes (from Nimes), which eventually became denim!

Jeans, in the form of overalls, became quite popular, but were still considered to be workmen’s clothes until they were popularised as a symbol of youthful rebellion by James Dean in the movie Rebel Without A Cause in the 1950s. Gradually, they became the general fashion in the USA as well as across the world and can be seen even in the remotest of villages today.

(For more fun journeys through India’s history, check out the recently released two-volume set, The History of India for Children Vol. 1 and Vol. 2, published by Hachette India. Follow on twitter @shrutigarodia_)