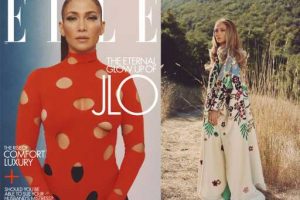 For Jennifer Lopez and her kids, it seems like education about Latinx pride, political action, and racial justice goes both ways. In the interview for the February cover of Elle, Lopez looks back at two big statements she made in 2020 with 12-year-old twins Max and Emme.

First, there was that spectacular Super Bowl Halftime show with Shakira. When it first aired, the political statements — children in cages, the combination of both the Puerto Rican and U.S. flags in her outfit — were downplayed by some viewers. But no, as with everything else JLo does, it was all very intentional, especially considering Emme’s involvement.

“It was super important to me, knowing that I was going to have such a big stage, a big audience, to really say some things about what was going on in this country with Latinos: people in cages, and moms and daughters being ripped apart from one another,” Lopez told Elle. “The idea of using the song ‘Let’s Get Loud’ [was about] never staying quiet and always using your voice against any injustices in this world. I feel like sometimes people act like it’s not our country, too. … It was very important to me to put in ‘Born in the U.S.A.’ and have my daughter sing it, because she was [born here] and I was, too. My mom came here. She was not born here; she was born in Puerto Rico, and [my parents] moved to New York. We are proud Puerto Ricans and Latinos, but we’re proud Americans, too.”

That “get loud” message was not lost on son Max. As Lopez related on Instagram last summer, he was the one who encouraged his mom to participate in Black Lives Matter protests in Los Angeles.

“He wanted me to make sure I realized that I had power and that I should use it, and I thought that was very insightful,” Lopez told the magazine. “It was one of those parenting moments when you’re like, ‘Oh, maybe I’m raising a conscientious, kind, loving kid here.’”

She might be making it sound like she raised her kids this way by accident, but we suspect this wasn’t completely out of the blue. Max and Emme had seen their mom use her voice for good before, and they were ready to join her in doing so again. The kids helped her make signs (one of which read “Let’s Get Loud for Black Lives Matter”) and had a conversation about racial justice. But despite her outspoken nature, the June march may have been Lopez’s first time in a public protest of that scale.

“I’m not used to being in big crowds like that, but it felt very empowering, and it was great to see so many young people out there, really young people,” she said of the BLM march she joined with fiancé Alex Rodriguez. “I don’t think it should ever be looked at as anything except trying to make things better, trying to make sure that people don’t get hurt, that people are treated fairly.”

These other celebrity parents have honest conversations with their kids about racism, too.

END_OF_DOCUMENT_TOKEN_TO_BE_REPLACED

END_OF_DOCUMENT_TOKEN_TO_BE_REPLACED
We and our partners use cookies on this site to improve our service, perform analytics, personalize advertising, measure advertising performance, and remember website preferences.Ok