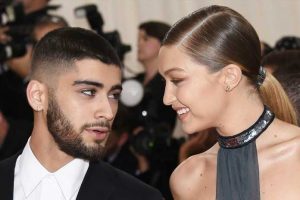 Doting dad! Zayn Malik didn’t “expect to be quite so into” fatherhood, but he’s loving life with his and Gigi Hadid’s 5-month-old daughter, Khai.

“Honestly, it’s amazing,” the former One Direction member, 28, told iHeart Radio’s Valentine in the Morning on Wednesday, March 17. “A lot of people that I was speaking to before she was born and stuff were like, ‘It’s a big adjustment, and it’s going to be a massive change.’ But honestly, she’s an amazing baby. It’s been really easy for me and Gig to kind of just ease into it. She kind of made it easy for us, she sleeps really well, she loves her milk. It’s just feeding and changing diapers at the moment. It’s wicked. I’m enjoying it, for sure.”

The singer went on to call his girlfriend, 25, a “good” parent, gushing, “She’s a wicked mom. Obviously, she’s a really big help with everything, and she’s doing well.”

The couple welcomed their baby girl in September 2020, five months after news broke that they were expecting their first child. The model revealed their little one’s name in January.

Since Khai’s arrival, Malik has loved singing to her. “It’s mainly melodies, and sometimes she kind of makes sounds back to me, which is amazing,” the new dad said on Wednesday.

The X Factor alum added that he was “always into [him]self” before becoming a father, but that has changed. “The fact that [Khai] has been so easy to kind of just adjust to has been surprising to me because I just love spending my days with her, hanging out with her, just doing really relaxing chill stuff,” the England native explained. “Just watching kid shows on TV, on Netflix, learning nursery rhymes, just rolling around with her and just singing to her. It’s a really different pace of life, but it’s been really easy to adjust to it, for sure. I think that’s the most surprising thing.”

As for Hadid, the California native told Vogue last month that while Khai is a “bright light,” they aren’t trying for baby No. 2 anytime soon.

“After [my home birth], Z and I looked at each other and were like, ‘We can have some time before we do that again,’” the Victoria’s Secret Angel said in February.