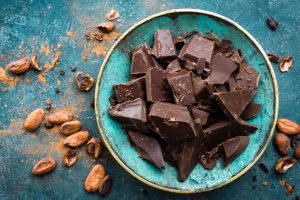 It not only tastes good, but also supports vascular function: regular consumption of dark chocolate with a high cocoa content had a study from Portugal, in young and healthy adults, positive effects on the cardiovascular System.

Regular consumption of chocolate with a high cocoa content is improved according to the researchers at the Polytechnic Institute in Coimbra, the function of the arteries. More specifically, the chocolate reduced consumption, the pressure in the artery of the upper arm, and promoted vascular relaxation, the scientists report in the journal Nutrition. Initially, similar values were observed in chocolate with a lower and a higher percentage of cocoa. After 30 days, the positive effects on the vessels in the group that consumed chocolate with a high cocoa content, but more pronounced, the values for blood pressure and elasticity of arteries were better. Also, the impact force and the potential energy of the heart were in the group higher, in the participants ate dark chocolate.

In the Experiment, 30 healthy people between 18 and 27 years participated. Half of them ate more than 30 days daily 20 grams of chocolate with a low cocoa content (about 55 percent), while the other half took each day 20 grams of chocolate with plenty of cocoa (approximately 90 percent). To have been the beginning and the end of the experiment, extensive measurements carried out, which reflect the function of the cardiovascular system.