Home » Personal Health » Is a ‘Situationship’ the New Friends With Benefits?

Is a ‘Situationship’ the New Friends With Benefits? 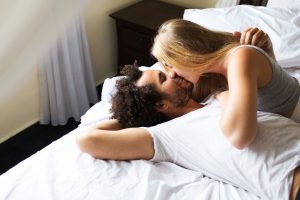 The first thing Sarah noticed about Sean (a pseudonym) was that he had a warm, easy smile, and it emerged when she dropped one of her signature “your mom” jokes. He had filtered into her mid-20s, post-college friend group, and after they met at a party, they started messaging each other online.

She soon learned that Sean had been through a daunting breakup. “He had made it clear he was dealing with some major healing work,” she recalls. “He was not interested in a girlfriend.” Sarah also wanted to keep their rapport casual. It was a “topsy-turvy” point in her life; she was dealing with her own post-breakup fallout and the exit of some friends from her life. “I felt anchorless and didn’t have any bandwidth,” she said. “This was easy and not emotionally draining in any way.”

They never went on dates, never to a restaurant or movie theater just the two of them. They’d meet at each other’s apartments. “We would watch a movie and have sex,” Sarah said. They both liked ’80s and ’90s nostalgia picks. If they went out, it was within that friend group. Ask anyone in said group and they’d say Sarah and Sean were “messing around.” There was no expectation of exclusivity, emotional or sexual.

“For being a guy I never called my boyfriend, it was one of my healthiest relationships.”

They talked about their feelings, usually as a safeguard, “to check in and see if anyone was falling for anyone else.” Neither of them did. They were in a situational relationship, or situationship.

After nine months, Sean met someone else that he wanted to properly designate his girlfriend. “We talked it through fairly quickly,” Sarah recalled. “I told him, ‘I’m not going to pretend I’m not sad about it. We’re not just playing games. I like you and I’m going to miss you.’”

It wasn’t jealousy or a letdown about some expectation for the evolution of their connection, just a sense of loss because they had a good thing going, she said. “For being a guy I never called my partner or boyfriend, it was one of the healthiest relationships I’ve ever been in.”

What Is a Situationship?

Pairings like Sarah and Sean’s, that involve feelings and expectations but not the full range implicit in a traditional romantic relationship, could have been summarized as “It’s complicated” to Facebook users of a decade ago.

They are more than a fuckbuddy or casual, no-strings-attached relationship, ones mostly about sex with little emotional investment or prospects for anything more. They are less—in terms of demands—than boyfriend/girlfriend relationships or same-sex equivalents, with default Saturday dates and daily text check-ins and vacations together. In situationships, some emotional connection and responsibility are established, but the course and nature of the relationship is ambiguous.

These label-less couplings are common and sometimes confusing, said Raffi Bilek, a couples counselor and director of the Baltimore Therapy Center.

“It starts when an individual doesn’t want to bring [a designation to their relationship] up, because they don’t want to put pressure on the relationship,” he says. But “it’s human nature to want something more defined. These relationships without a label are not good for the long term. I think people will do this for weeks or months.” At some point, “people will ask: What are we doing?”

Ambiguity seems initially to be the greatest benefit for a situationship. In many cases, it’s also the design flaw that causes problems.

How Do Situationships Happen?

Marianne Dainton, PhD, a professor specializing interpersonal communication at La Salle University in Philadelphia, says she first heard the term situationship while holding focus groups of undergrads about their relationships and terminology in 2017.

“Situationships are fairly new and I think hookup culture is part of it,” she says. Both terms, situationships and hookups, have an ambiguity that is useful to a social media-hooked generation that is obsessed with image.

By publically having a boyfriend or girlfriend, a person creates a set of expectations they can fail at, Dainton said. A breakup is seen as a loss of social status (for the dumped) or a personal failing (for both). However, if one is not in a relationship, but a “situationship,”there is no stature at risk — because those terms have no universal meaning or endgame.

Undergrads have a range of terms for arrangements that lead into a situationship. A “hookup” can mean any physically intimate act, said Dainton, ranging from intense kissing to sexual intercourse (and is more used as a verb; it’s now considered mildly offensive as a noun). A “one-night stand” is a near stranger one takes to bed and never plans to intentionally see again. A “booty call” is an acquaintance one contacts for sex sporadically where each encounter comes without the hint of a promise of a future one. (Surprisingly, the term persists two decades after it was popularized on a 1993 Def Comedy Jam special. “Booty call” has outlasted the actual practice of talking on the phone.)

The next stage is a “friend with benefits,” which are misunderstood to mean sex partners who don’t share any intimacy or connection, says Dainton. “There is a ‘friend’ part to them,” she says. “People understand ‘they care for me in ways.’ There is some level of emotional risk.”

These pairings often become situationships, with opacity over the level of commitment and intimacy expected. At this point, ambiguity becomes harmful, says Dainton. A telltale sign that a situationship is unsustainable is that a partner becomes jealous when their FWB interacts with someone else who could be a romantic interest.

There’s often an outburst, often spurred by alcohol, that makes it “so you are so emotional you can’t filter your thoughts or you’re so inebriated you can’t,” says Dainton. One person is then moved to ask: What are we? Where is this headed? Are we a couple?

Another common trigger is the rush of passions that go with sex, so — cliché enough — these discussions often happen between two people lying in bed.

Young people then begin a process they’ve dubbed “talking.” “This might not actually mean ‘talking,’” said Dainton. “It could be texting.” But it means an extended conversation establishing exact expectations. It’s a negotiation, almost, and could fall apart mid-process; you’re “talking” to your situationship partner in the same way the U.S. is “talking” to North Korea.

If “talking” goes well, the couple is then “dating,” which, less than actually planning outings together, more means being seen as a couple to friends and past the situationship stage. It’s the final act of risking that embarrassment if the Facebook-official-level relationship doesn’t pan out.

A viral tweet from the Twitter user @suuuuuunshine outlined a new baseball analogy for relationships: “1st base: sex, 2nd base: hitting each other up when the sun is out, 3rd base: sharing childhood trauma, home run: verbally expressing romantic interest.” It’s not far off: Young people run past a series of steps — including sex and emotional vulnerability — before they label their relationships, leading to a variety of situationships before one runs to home base.

What Are Potential Problems With Situationships?

Once researchers looked into actual sexual norms, they found that young people are having less sex than people their age did in decades past. The Centers for Disease Control and Prevention found that the percentage of high-schoolers who’d had intercourse dropped from 54 to 40 percent from 1991 to 2017. Sexual frequency also diminished from Generation X to Generation Y and millennials are on track to have fewer partners by adulthood than did either X-ers or Baby Boomer.

Nicole Prause, PhD, a sex researcher formerly associated with the Sexual Psychophysiology and Affective Neuroscience Laboratory at the University of California, Los Angeles, said that concerns over more casual relationships constitute “a sex panic,” that is familiar whenever sexual norms change.

“I think society is shifting a little bit, to be a little bit more European” said Prause. “Europeans are less likely to marry, tend to be less interested in status and don’t need the label. Maybe it’s a more progressive form [of coupling].”

Dainton said new terms and evasive labels, like hookups and situationships, are the result of “a new generation taking on a new paradigm.”

One factor is that millennials have multiple friends of the opposite gender. “It used to be that once you started interacting with someone from the opposite sex, that was the start of a flirtation,” said Dainton. “It was expected that to be the goal of the interaction. …. The experience is shifting.”

If heterosexual young people meets a friend of the opposite gender they’re attracted to, but are unsure of, a situationship is one way their attraction can pan out.

She said her greatest concern is young people’s obsession over maintaining appearances. “We are looking at a generation of people afraid of harming their face,” said Dainton, “people who want to remain free of being rejected.”

The whole purpose of a situationship is to avoid the pressure of a relationship.

She added, “People underestimate how much saving face is an essential part of young adults’ behavior patterns and that it interferes with their expectations.”

Some avoid asking for what they want due to an unhealthy fear of rejection, she said.

How to Turn a Situationship Into A Relationship

The whole purpose of a situationship is to avoid the pressure of a relationship. Some people, like Sarah, enjoy them for that reason and they run their course without any disappointment.

Other situationships conflict with a slow-brewing need for clarity, resulting in the kind of drunken outburst Dainton describes as a common part of the unwinding of a situationship. It’s not the best way to resolve conflicting feelings, she added.

“The ideal way is to make sure it’s a setting where you can have an honest conversation and no one is an altered state,” she said. Also avoid bringing up the “what are we?” talk before or after sex and don’t compound it into another argument.

Honesty is the best policy, she said, and most people are not averse to hearing, “I really like you,” even if there is some difficult “talking” to come afterwards.

Bilek, of the Baltimore Therapy Center, agreed that an open and frank conversation is the only productive transition. “Tell them, ‘This is a good partnership for me’ and make sure to ask them how they feel.”

If you don’t feel comfortable doing so, your situationship is probably a poor candidate for an upgrade, he added. “If you are confused or the other person is clearly putting it off, you should question if the whole arrangement is right for you.”