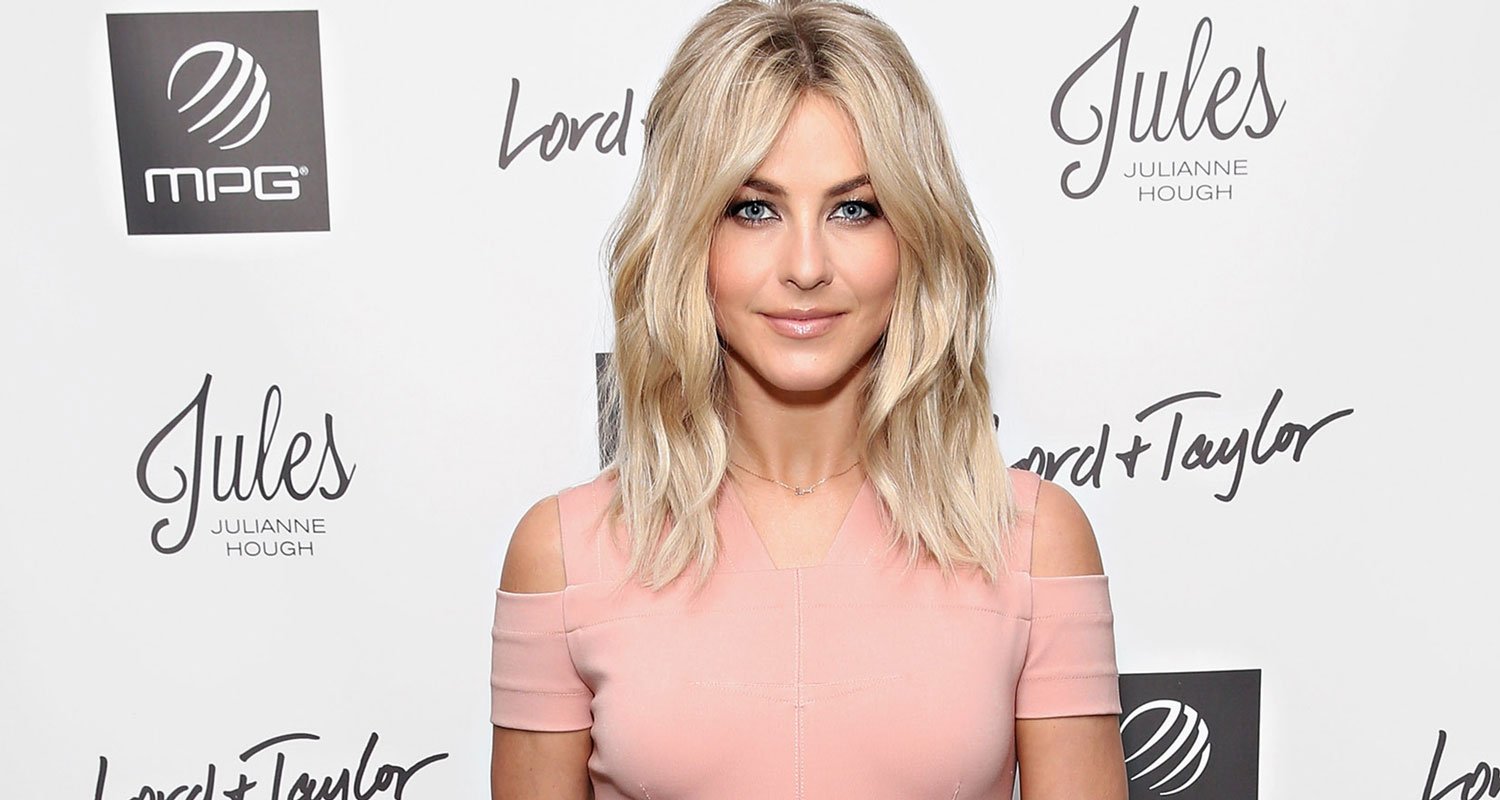 Julianne Hough is best known for her Dancing With The Stars career (she’s a two-time champion!) and her work as an actress. But she’s also a 30-year-old who’s spent half of her life dealing with endometriosis—and suffering in silence.

“I first started experiencing symptoms back when I was 15, but I thought it was just what it feels like to be a girl with bad periods,” says Julianne. “I didn’t think to go to the gynaecologist. Because I’m a competitor, I felt like I had to push through the pain and just work.”

She’s not alone: One in 10 women of reproductive age have endometriosis, according to the American College of Obstetricians and Gynecologists (ACOG).

“Endometriosis is one of the most common conditions that affects young women,” says Sanjay Agarwal, M.D, F.A.C.O.G., director of fertility services, and professor of obstetrics, gynaecology and reproductive sciences at UC San Diego Health. “Women can suffer in pain for as long as 10 years before seeking help.”

The condition occurs when the tissue that typically lines the uterus—the endometrium—grows outside of the uterus, in places like the ovaries, fallopian tubes, and even the bladder and rectum, according to the ACOG.

This overgrowth of tissue most commonly causes chronic, long-term pelvic pain, per the ACOG. The pain usually surfaces around menstruation, but it can also worsen with bowel movements and sexual activity, says Agarwal. Heavy periods are another common symptom of the condition.

Excruciating cramps finally sent Julianne to the doctor for a diagnosis.

Julianne says her contraction-like “episodes” of abdominal cramping often come on unexpectedly, leaving her breathless for 30 seconds to a minute until the pain passes.

When she was 20 years old, Julianne had a bout of cramping during a live shooting of Dancing With The Stars that finally sent her to the emergency room. “I was just waiting for a commercial break,” says Julianne. “I went to the ER and nobody could tell me what was wrong with me.”

Feeling free, feeling connected, and feeling grounded (even 3,560 ft. up ?)

Finally, Julianne received answers after visiting a gynaecologist in LA, who performed a pelvic exam, acknowledged her family’s history with the condition, and eventually suggested a laparoscopy (a surgical procedure where doctors look for signs of endometrial tissue outside of the uterus).

As an athlete, Julianne took the diagnosis hard, especially after years of taking care of her body and having the mindset that she could push through anything. “It was an emotional trauma,” she says. “At the time, I felt very lonely and like nobody understood me. I had no idea that [so many women] had endometriosis.”

Even after her diagnosis, Julianne kept her endometriosis a secret for years, mostly because she didn’t understand the condition at first. She also didn’t want to have a disease that held her back “personally, professionally, and relationship-wise.”

“It can definitely cut things short,” says Julianne. “Sometimes we’re in the middle and I’m just like ‘AH, stop!'” Other times, she needs to tell her husband, professional hockey player Brooks Laich, to just forget it that night.

Agarwal says pain during intercourse is a top concern among his patients. “It can cause pain with penetration, so women won’t engage in intercourse or they’ll terminate it early because of the pain,” says Agarwal. It can affect intimacy in other ways, too: “Long-term pain can have psychological consequences like depression, anxiety, or other emotional issues.”

“It can be really frustrating,” says Julianne. But Brooks is supportive and understanding of her condition. “He only wants to love on me and make me feel good.” And, according to Julianne, the couple doesn’t necessarily need penetration to keep their relationship hot and heavy. Their secret? Foreplay (along with open and honest communication and creativity, of course).

“There’s so much intimacy without actually having sex,” says Julianne. “There are some cool things we’ve learned and it’s literally been awesome.”

Agarwal offers some additional tips, like pelvic physical therapy or, doctor permitting, a new FDA-approved drug called Orilissa, which improves pain with intercourse. He also advises seeking psychological help when necessary to get past any non-physical barriers.

Now, Julianne says she’s learned to listen to her body throughout the day.

“My body is very precious to me, I didn’t think of it that way before,” says Julianne. “If I don’t feel like working out that day, then I don’t do it. If I want to sleep in, then I will.”

Julianne also takes a mindful approach to her condition. She keeps her body moving, even if some days call for just simply standing or walking around.

“If I feel stagnant, then my body’s stagnant, and then my insides feel stagnant,” she says. “Even if I don’t want to move or exercise, I just stand with my hands on my abdomen, move my hips, and send love to my pelvic area.”

Starting the week off right, and one of the ways I do that is by scanning my body. Ever tried it? It’s something I try to do daily, or sometimes multiple times a day depending on what’s going on in my life. It’s the easiest way for me to reconnect with all parts of myself. Here are the steps I follow: 1. Rub your hands together, creating heat and friction. 2. Separate your hands and feel the energy between them. 3. Start at the top of your head and work your way down the body. 4. While floating your hand over your body, concentrate on where you feel a strong connection (for example, could be your heart, your solar plex, or your third eye,). 5. Place a hand on that area and breathe deep in through your nose and out through your mouth. Do this for a minute or so. 6. Now do that body scan again, this time focusing on an area that feels disconnected. 7. Once you find that place, place your hands on the spot and breathe into it, and speak the words “I feel disconnected”. One more thing I like to do during this is make a sound… if the area that feels disconnected isn’t easy to breathe into, make a sound that reflects the discomfort (sound is one of the best healing methods). 8. Breathe into that area for about a minute. 9. Now go back to the part of your body that felt connected and place one hand there. Breathe in through your nose into that spot. On the exhale, place your other hand in the area that felt disconnected and breathe out all of the positive connected air into that space. 10. Do this for a few minutes, or however long feels good. 11. Repeat the body scan and notice a difference in your breath, the peace within, and total connectivity to all parts of you! ?

And, of course, Julianne says communication is key to dealing with endometriosis—with her loved ones, doctors, and other women—when she’s in need of support. “There’s a tribe of women who support each other like crazy on websites like SpeakEndo,” she says. (SpeakEndo is a campaign to empower women with endometriosis.)

Julianne also says it’s important for women with endometriosis to educate themselves on the condition. “The more educated you become, the more powerful you’re going to feel,” Julianne says. “You have two choices: You can hate it, or it can just become part of you. It doesn’t need to define you, it’s just an aspect of who you are.”

Julianne still stuffers from endometriosis symptoms, but she’s learned how to handle them. “Instead of getting frustrated, I acknowledge it, honour what it is, and move on. It’s all about connecting to your body, loving it unconditionally, and trusting how you feel.”